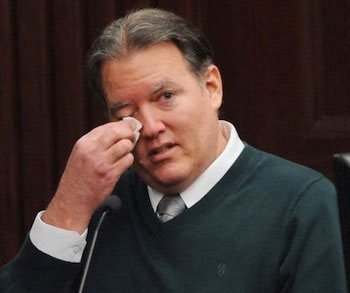 “I should kill that motherf*****,” Dunn claims he heard one of the teens say before he noticed what he thought was the barrel of a gun sticking out of the vehicle. (Photo credit: AP)

On Saturday a Jacksonville, Florida, jury found Michael David Dunn guilty on three counts of attempted second-degree murder, but the fourth count Dunn was facing – first-degree murder for the fatal shooting of a 17-year-old – ended in a mistrial with a hung jury, CNN reports.

The November 2012 incident occurred at a Jacksonville gas station and stemmed from an argument over loud music. Dunn had apparently pulled into the gas station where the four teenagers were sitting in a Dodge Durango parked in the lot and listening to music, which Dunn claims was beyond the point of being disruptive.

“It got really loud,” Dunn said. “My rear view mirror was shaking. My eardrums were vibrating. It was ridiculously loud.”

The man asked the teens to turn the music down and initially they did, but it was soon cranked back up. At that point, Dunn claims, the teens began to threaten him. And when the man thought he saw the barrel of a gun sticking out of the vehicle, Dunn, who has a valid concealed carry permit, pulled a pistol from his glove box and opened fire into the Durango.

Dunn fired a total of 10 shots. Three of the teens – Leland Brunson, Tommie Stornes and Tevin Thompson – survived the incident, but Jordan Davis died when one of the shots punctured his liver, lung and aorta.

Dunn claimed that he feared for his life and acted in self-defense, but prosecutors claimed otherwise, saying that Dunn’s actions were reckless, even paralleling the case to the shooting death of Trayvon Martin. 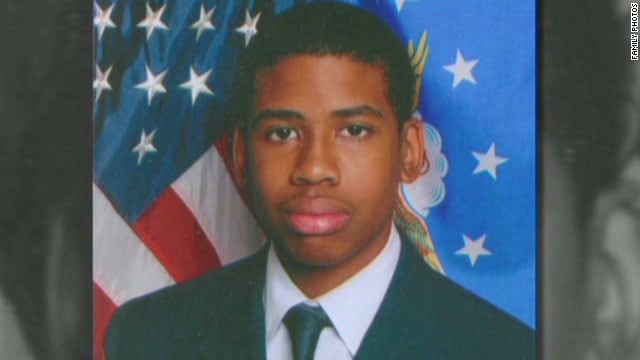 Jordan Davis would have been 19-years-old on Sunday. (Photo credit: CNN)

No gun was found in the teen’s vehicle, but Dunn still thinks that they could have ditched the gun somewhere before authorities arrived. Additionally, Dunn failed to call the police following the incident and instead went back to his hotel, walked his dog, ordered pizza, then drank a rum and cola.

Dunn had no legitimate reason for not contacting authorities, only that he was still in an irrational state of mind following the incident, which left him “horrified” over how things “escalated… over a common courtesy.”

Dunn claims he never intended to kill anyone and that he become physically ill when he learned of the teen’s death hours later.

Nonetheless, the jury still found him guilty for what they perceived to be attempted murder of the teens who survived, a verdict which could warrant a minimum 60 years in prison – 20 years for each count.

Yet the jury, which was said to be “struggling, obviously,” even after 30 hours of deliberation could not come to a decision regarding the first-degree murder charges for the death of Davis, who his parents claim was “a good kid.”

If convicted on the fourth charge, Dunn could face a minimum total of 75 years in prison, ultimately a life sentence for the 47-year-old.

Although the hung jury resulted in a mistrial, prosecutors will likely seek a new trial.

Davis’ parents, although still distraught over losing their son, are glad to have at least a small bit of closure.  They also showed sympathy for the man who fatally shot their son.

Cory Strolla, Dunn’s lawyer, said that his client is “in disbelief,” and added, “Everybody lost something in this.”