‘Crazy b*tch has a gun!’ suspect yells as he runs from victim’s home (VIDEO) 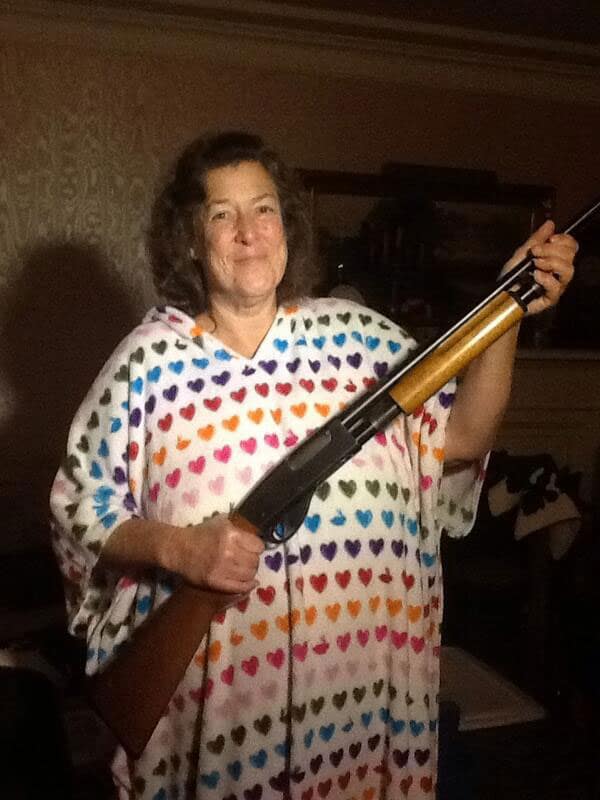 The suspects quickly realized not to mess with this “crazy b*tch.” (Photo credit: Fox LA)

When two young men went on an early morning crime spree in a Cheviot Hills, California, neighborhood Thursday the last thing they expected to encounter as they attempted to break into the third house for the day was a woman wearing a mumu… and carrying a shotgun.

It was about 3:00 a.m. when the homeowner, who wished to only be identified as Carla, heard her dog barking. She went to the kitchen to look out of the window and saw a strange man standing in her yard and another man standing beside a car parked outside.

“First thing I said to him, of course through the window, was who the hell are you and what are you doing in my yard,” she told KTLA.

But Carla, who was home alone with her 90-year-old mother at the time, didn’t wait for a reply, she simply went to retrieve her shotgun.

However, unaware that they were literally playing with fire, the two suspects continued to attempt to get inside the woman’s home.

“I have a shotgun and I know how to use it!” she yelled at them through the door, before walking outside wearing a colorful mumu and wielding a shotgun.

Just to show them that she meant business, she fired a warning shot into the ground.

Suddenly, “He was running away and I became the aggressor,” Carla explained.

And that’s when she heard one of the suspects yell, “Crazy b*tch has a gun!” as they ran away and sped off in their white sedan.

Unfortunately, Carla wasn’t able to provide a good description of the suspects, but authorities do believe that they were responsible for the other two burglaries in the neighborhood that same morning. Although they managed to get into those homes and take some items, nobody was injured and in fact, the homeowners slept through the break-ins.

According to area residents, there had been a total of five break-ins in the past week and authorities are working to determine if they are all related.

Meanwhile, Carla hopes she sent a clear message to the suspects and anyone else thinking of breaking into her home.

“I’m not a sitting duck,” she said, adding, “You have to at some point in time, take responsibility for yourself, for your own safety and that’s all I was doing.”