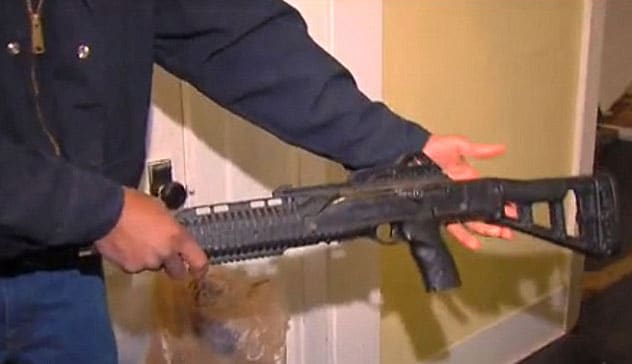 “I let them know I had a gun once they were in the house and they challenged me and said, ‘No you don’t have a gun,’ so that’s when I shot off the first round,” the mother told reporters after the incident. (Photo credit: ABC)

A Detroit mother of two protected her family with a Hi-Point carbine (what some are calling an “assault rifle”) when she opened fire on three teens, one armed with a handgun, who kicked in her door during a home invasion Monday night.

The woman, who did not wish to be identified, told a local ABC affiliate that she “didn’t have time to get scared,” but readily admitted that the fear set in after the fact.

When she heard the teens kicking in the door, she immediately ran to get her gun and warned them that she was armed.

But the suspects attempted to call her bluff and said she didn’t have a gun. That’s when she opened fire to let them know that she was indeed locked and loaded and ready to defend her family.

The three teens scattered and two of them immediately went to run away. However, the third dropped his gun in the snow on the way out and instead of following his accomplices’ lead, decided instead to retrieve the gun and attempt to go back inside the house. But the relentless mom didn’t back down and simply opened fire again. This time scaring him off for good.

And the entire incident was caught by a video surveillance system that the woman and her husband just recently had installed following another break-in just two weeks prior.

Immediately after the incident, the woman called 911. Police rapidly responded and found the three teen suspects, who are now in jail. The woman gave the officers great credit for their quick actions in apprehending the suspects.

Sgt. Michael Woody of the Detroit Police Department reiterated a message to remaining criminals on the streets.

“Your time is up. We don’t have any more patience for criminals in this city. We will get you, we will find you, and you will go to jail,” Woody said.

Although it’s unknown what the suspects were looking to steal when they broke into the home, one thing is apparent – the mother was willing to protect her two small children by any means necessary.