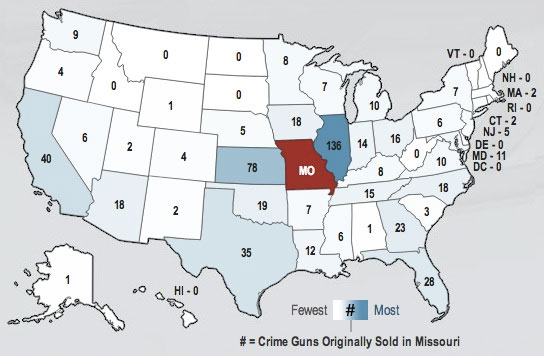 The map shows the number of firearms originally purchased in Missouri which landed in other states. (Photo credit: TraceTheGuns.org)

According to a recent study, the increase in murders in the state of Missouri is likely the result of the state’s 2007 decision to repeal the permit-to-purchase (PTP) handgun law, which required a license showing that the person attempting to purchase a firearm had passed a background check.

The change in the law corresponded with an increased annual homicide rate of 16 percent, the equivalent of more than 50 additional murders each year between 2008 and 2012.

The study, which will be published in the Journal of Urban Health and was conducted by researchers with the Johns Hopkins Center for Gun Policy and Research, collected and analyzed data from the FBI’s Uniform Crime Reporting system for the years 1999 to 2012.

Researchers also took into consideration changes in policing, incarceration, burglaries, unemployment, poverty and other state laws passed during that time period, which could have affected the data. The rate was also calculated by only including homicides in which a firearm was used by the perpetrator.

Researchers found that the murder rate began to rise the first full year following the change in the law. In addition, the spike wasn’t consistent in states across the country, yet the increase was consistent in counties across the state, further backing their claim that the two are connected.

Moreover, according to additional data collected from TraceTheGuns.org, authorities in the states surrounding Missouri also reported an increase in the number of criminals in possession of guns which had originally been purchased in Missouri. That data showed 136 guns purchased from Missouri ended up in Illinois and 78 landed in neighboring Kansas.

“This study provides compelling confirmation that weaknesses in firearm laws lead to deaths from gun violence,” said the study’s lead author and director of the Johns Hopkins Center for Gun Policy and Research, Daniel Webster.

“There is strong evidence to support the idea that the repeal of Missouri’s handgun purchaser licensing law contributed to dozens of additional murders in Missouri each year since the law was changed,” he continued.

While background checks are required to purchase guns from a federally licensed dealer, not all states require them for private purchases, including gun shows, which some claim increases the availability of firearms to criminals. However, 15 states, including New York, Illinois and California, do require background checks when purchasing from unlicensed individuals, and of those, 10 require an additional permit as well. 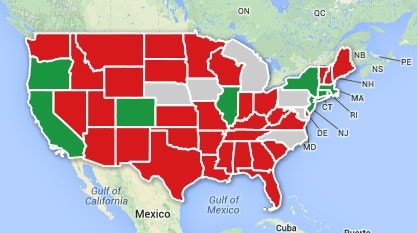 “Because many perpetrators of homicide have backgrounds that would prohibit them from possessing firearms under federal law, they seek out private sellers to acquire their weapons,” said Jon Vernick, study author and deputy director for the Johns Hopkins Center for Gun Policy and Research.

“Requiring a background check on all gun sales is a commonsense approach to reducing gun violence that does not infringe upon the Second Amendment rights of law-abiding gun owners,” he concluded.

Not surprisingly, those organizations that support tougher gun laws at the federal and state levels were quick to embrace the findings in the study.

“The latest research from Missouri is yet another proof point for why we need to close the gaping loophole that makes it easy for criminals and other dangerous people to get their hands on guns,” said spokeswoman Erika Soto Lamb from Moms Demand Actions for Gun Sense in America, a organization that has merged with Bloomberg’s Mayors Against Illegal Guns.

“States that have closed the background check loophole have fewer women murdered by their partners, fewer police killed with handguns and fewer firearm suicides,” Lamb said in an email to Guns.com.  “The vast majority of gun owners and NRA members agree with this sensible reform — its time for our political leaders to take action.”

Though, not everyone is convinced that the repeal of the PTP mandate was behind the increase in crime.

Bill Frady, the host of the pro-gun radio show Lock N Loaded, presented by Gun Owners of America, raised some interesting questions about the report.

“There are a lot of holes in the study, not the least of which is actual weapons mentioned and their origin,” said Frady in an email to Guns.com.

“It seems like they are making a cause and effect argument. If that is a 4 percent increase, that could possibly be in-line with private sales because that’s probably the average nationally,” Frady continued.

“Would criminals have obtained PTP license when it is force? Has defensive gun use gone up as well? Whole lot of positions to question this and pick it apart, he said, adding “And it originate at Johns Hopkins where all guns are bad.”

“Bottom line: You can’t do a study like this on one state over time,” Lott explained in an article Tuesday, adding that there are still 17 states in the country which require universal background checks.

“There is research on these universal background checks across all the states… it show no benefit in terms of murder rates from these laws. The question the media should ask is: why pick one state when there are so many states with this law? Not only isn’t it the right way to do research, it is pretty obvious to anyone who has looked at the national data that Webster picked that one state to report because it was the one that gave him the result that he wanted.”

In addition, Lott questions “why the paper only examines murder rates and not any other type of violent crime. Again, the answer is clear: none of the other violent crime rates, including robbery, showed the change that Webster desired.”

In examining the study, what are your thoughts? Was it agenda-driven research or was it fair and balanced empirical reporting?