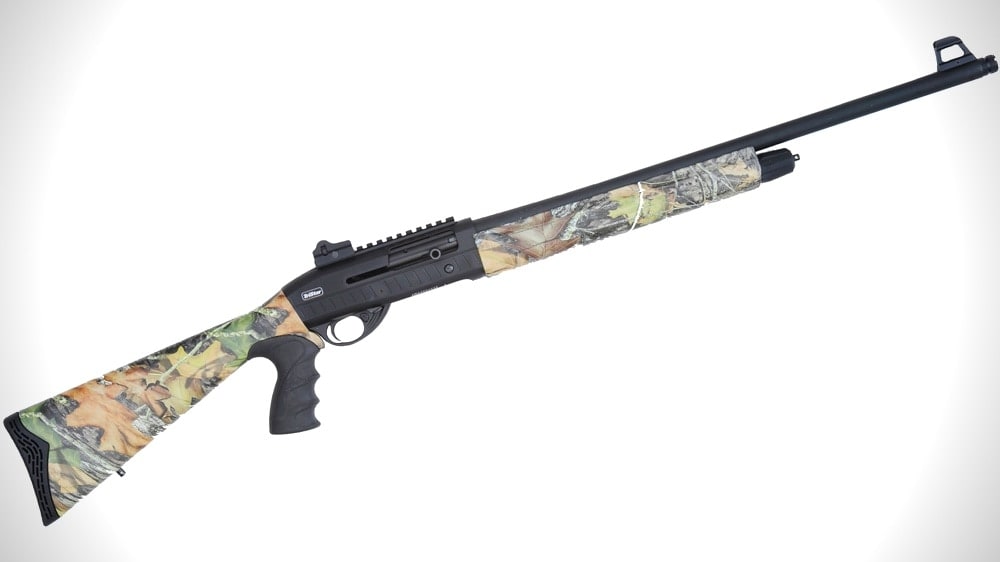 TriStar Arms is expanding on their line of semi-automatic hunting shotguns with the new Raptor ATAC Turkey shotgun. It’s black with Mossy Oak Break Up camo-patterned furniture and has a handful of features turkey hunters will appreciate.

It has a 24-inch barrel that gives it a long sight radius of about 30 inches that will deliver tight groups without being overly long and hard to use in thick brush. The shotgun is chambered for three-inch 12-gauge shells and is compatible with Beretta Mobile chokes. An extended turkey choke is included with the shotgun.

The barrel is completely chrome-lined, including the chamber for increased wear and corrosion resistance.

The Raptor ATAC Turkey has raised rifle sights as well as a Picatinny rail for red dot sights and other shotgun optics. The rear sight is an aperture or peep sight and the front sight includes a fiber-optic rod for increased visibility.

Designed to be as fast-handling as possible, the shotgun uses a pistol grip instead of a traditional stock. The pistol grip is rubber so as to be easy on the hands and wrists.

“I’ve hunted turkeys for years with several of our TriStar shotguns,” said said Gus Bader, president of TriStar Arms, “and while this gun has been designed specifically for turkey hunters, a quick change to a different choke tube, and it’s ready for hunting big game or protecting your home in threatening situations.”

It has a five-round magazine tube and comes with a plug for use in the field. It is also fit with a pair of swivel studs for use with a sling.

The whole package weighs in at 7.2 pounds.

What may be the most inviting feature of the Raptor ATAC Turkey is the price tag. With an MSRP of just $489, real-world prices should be under $400. Other models of Raptor shotguns with similar MSRPs are often seen in stores for between $350 and $400.

Working out of North Kansas City, Mo., TriStar is quickly earning a fine reputation for their low-priced firearms, and these imported shotguns are no exception. Manufactured for TriStar by Armsan of Turkey, these shotguns have a solid five-year warranty. TriStar is also getting good marks for solid, helpful customer service in those cases where people have run into problems with their long guns.

If you’re looking to pick up a new semi-auto turkey gun on a budget you will want to check out the Raptor ATAC Turkey as soon as you get the chance.

TriStar carries a fairly broad catalog of low-priced, high-featured shotguns that range from traditional to the very tactical and they’re also particularly friendly to lefties. In our experience, these are solid performers, not just for the money, but all around.