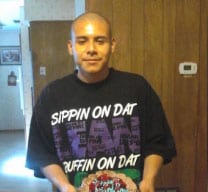 The teen’s family, which included two younger sisters, said he worked at a concrete company with his father. (Photo credit: ABC)

When an off-duty police officer witnessed a robbery and beating Sunday night in Houston, he stopped to intervene, but the confrontation turned deadly for the teen suspect when he revealed a pistol and began to come at the officer in a threatening manner.

According to reports from local media, it was just before 9:00 p.m. when the 22-year law enforcement veteran was driving past a convenience store and noticed two young men jump out from behind a dumpster and begin beating a third man carrying a bag of groceries in what appeared to be a robbery.

Carl Rodriguez, who was off-duty and driving his own personal truck at the time, turned around and pulled into the parking lot to help the victim.

Rodriguez told the two men to get away from the victim and leave him alone, but they ignored his request. Then one of them turned his attention to Rodriguez instead and pulled up his shirt to reveal a pistol in his waistband as he walked towards Rodriguez’s truck.

The officer never left his truck, but the suspect continued toward him.

“He was inside the truck the entire time, the suspect was walking toward him, gaining ground on him, facing him—right on—showing the pistol. At that point the officer wasn’t taking any chances,” said Houston Police Department spokesman John Cannon.

Rodriguez then grabbed his duty weapon and fired at the suspect, who was later identified as 17-year-old Oscar Gaspar. The second suspect, whose name has not been released because he is also a juvenile, fled the scene but was later arrested at his home, a short distance from the store where the incident occurred.

Gaspar died at the scene and took his last breaths in front of some of his neighborhood friends.

Family and friends say that they will never really know what happened Sunday night, but some indicated that Gaspar never even had a gun.

Victor Hernandez, a 13-year-old witness, told reporters, “When they searched him in front of me, I didn’t see them find anything.”

However, authorities later confirmed that they did recover a pistol from the scene.

In addition, the entire incident was captured on a video surveillance system from the house across the street from the store. Authorities confiscated the video for evidence.

The robbery victim who was being beaten by the teens was treated for minor injuries and said to be doing okay.

As is standard procedure, Rodriguez has been placed on administrative leave while an investigation is conducted.