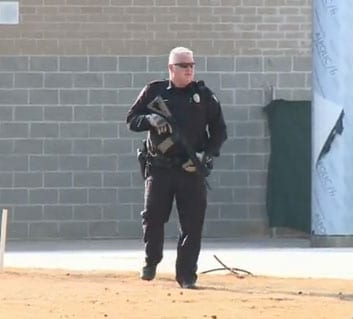 Students said that when they started to emerge from their classrooms and saw the officers outside armed with ‘assault rifles,’ they knew that the lockdown was no ordinary drill. (Photo credit: NBC)

A 16-year-old boy has been arrested and is now facing multiple charges after he attempted to sell stolen guns to students at a Chamblee, Georgia, high school Tuesday afternoon.

It was around 2:20 p.m., about an hour before Chamblee Charter High School was due to be let out, when a student alerted a school resource officer of the teen attempting to sell the guns, local media reported.

The resource officer called for backup and the school immediately went into a level-3 lockdown as it was surrounded by local law enforcement.

“Basically we turn off the lights, everybody is supposed to stay quiet, the teachers close the door and lock the door and just stay calm,” senior Allie Johnson said, describing the lockdown to reporters.

“Everyone in the classroom was just kind of like squeamish and trying to figure out what was going on,” another student said, as he recalled the unnerving moments in which students and staff tried to decipher if this was just another drill or if there was any real danger.

The lockdown only lasted about 30 minutes and the teen suspect was found about 10 minutes after the school resource officer was initially alerted of the potential threat.

According to Chamblee Police Chief R. Marc Johnson, the teen, whose name has not been released due to his age, “has cooperated with authorities.”

When asked if had any additional weapons with him, he led officers to a place behind the school’s football field where they found a cache containing two loaded pistols and ammo as well as duffle bags which held two more rifles and a sword.

The boy also admitted that he had stolen the weapons, as well as other items including an Xbox, a computer tablet and a coin collection, from a nearby home earlier that day. Johnson said the boy’s “intent was simply to sell the weapons for money.”

“He never made any threats to the high school or claims he was going to do anything against the high school,” Johnson added, nonetheless commending the quick actions of everyone involved.

Authorities also confirmed that the teen is a current student at the school, but had been suspended prior to Tuesday’s incident. However, according to witnesses, he was still dropped off at the school that morning as if it was a regular day for him.

Steve Hyslip, who owns the home from which the teen stole the firearms, knew something was wrong when he returned home that afternoon to find the streets near the school swarmed with police officers. And once he got to his home, he realized that he had been the victim of a burglary.

Hyslip’s fence had been cut, the screen on his screen door slashed and his back door kicked in, and inside the house his bedroom had been totally ransacked.

But Hyslip said that wasn’t the first time that he’s had trouble with students, and that he’s complained to the school about it in the past.

“I’ve chased them away several times out of the back,” he said. “It’s not surprising that eventually somebody was going to break into my house.”

Nonetheless, Hyslip is glad the incident ended the way it did.

“It could have been bad, of course. I was glad they caught the kid,” he said.