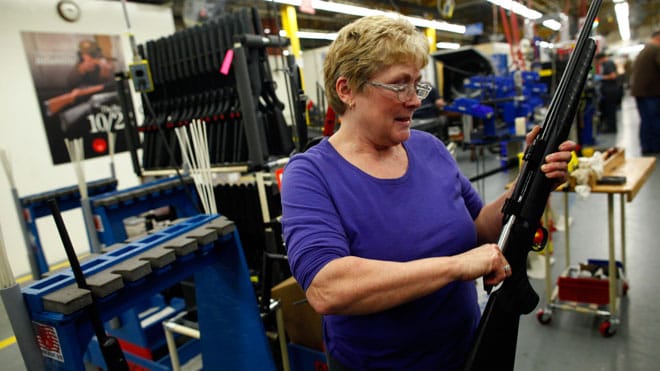 The gun production numbers are in from 2012 and one can reasonably conclude that the Obama administration is great for the firearms industry.

According to figures from the Bureau of Alcohol, Tobacco, Firearms and Explosives there were more than 8.57 million guns produced in the U.S in 2012, which is a 31 percent increase from the prior year and nearly triple from 2000.

The BATFE released the latest Annual Firearms Manufacturers and Export Report this month. These reports, compiled from all gun makers in the country large and small, are delayed a year due to the Trade Secrets Act. Because of this, the latest data report covers 2012.

Compared with the eight-year Clinton administration’s production figures of 33 million, the current administration is on target to break that figure as well. 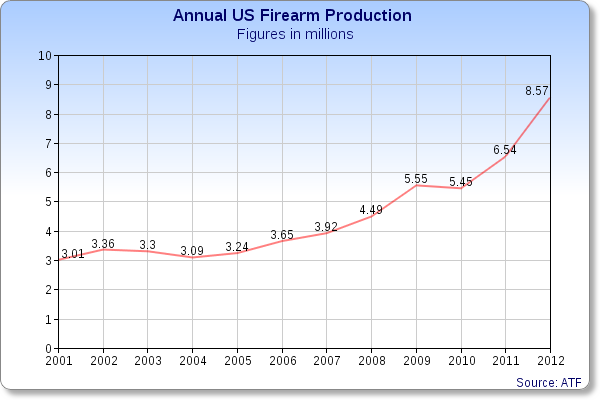 U.S. annual gun production figures, largely constant at 3-4 million from 2000-2008, have risen dramatically in the past four years according to data from the ATF.

This has led some gun stores to dub the President as the ‘gun salesman of the year,’ going so far as to put it on their store’s window display.

Of this total, just over 3 percent were exported from the country.

The top pistol maker was Ruger with 861,357 made at its Prescott, Arizona, plant. The top revolver maker was also Ruger with 251,644 wheel guns (followed very closely by S&W). Remington was at the top of the list in rifle production with 738,286 guns while Mossberg/Maverick made over half of the shotguns in the country in 2012, accounting for 534,756 scatterguns of all gauges according to the data.

When asked for comment on the increase in figures from 2000 to 2012, Lawrence G. Keane, Senior Vice President, Assistant Secretary & General Counsel of the National Shooting Sports Foundation told Guns.com:

“The numbers reflect growing consumer demand. Wait until you see the data for 2013.  The reason for increasing demand is multi-faceted but surely is driven by concern that state and federal legislation would infringe on the Second Amendment,” said Keane.

It should prove interesting to see what the January 2015 report says about 2013’s production figures.

Last year, with empty store shelves across the country, gun makers running huge backlogs of orders,  and an all-time record number of more than 21-million FBI NICS checks, you can almost hear the chart rising already.