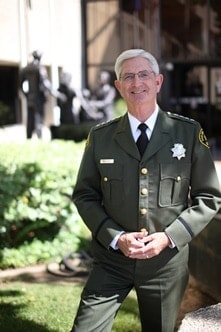 In the past three days two of the largest counties in California have witnessed their sheriffs switch from ‘may issue’ to ‘shall issue’ in the wake of the Peruta v. San Diego reversal by a federal court.

San Diego County’s sheriff, who was expected to appeal the decision, announced late Friday that he would respect the court’s findings and not seek an en banc review of the case.

“Since becoming Sheriff, I have always maintained that it is the legislature’s responsibility to make the laws, and the judiciary’s responsibility to interpret them and their constitutionality.  Law enforcement’s role is to uphold and enforce the law,” said San Diego County Sheriff Bill Gore in a press release (pdf) late Friday.

Gore acknowledged this authority in saying, “The legislature certainly has the power to amend California’s firearm carry process, and the Ninth Circuit has the ability to bring its own motion to rehear the decision of the three member panel en banc.”

“However, while the court’s decision clearly involves a question of exceptional importance, and conflicts with decisions of other United States Courts of Appeals, the opinion provides clear guidance in the context of issuing CCWs in California,” it continued.

“I see no need for me to petition for a hearing or rehearing en banc in order to be able to carry out my duties as Sheriff of San Diego County,” he added. “As a result, I have advised the Office of County Counsel that I will not seek such a hearing.”

With this, “should the decision of the Ninth Circuit become final, the San Diego Sheriff’s Department will begin to issue CCW’s in situations where the applicant has met all other lawful qualifications and has requested a CCW for purposes of self-defense” concluded the press release.

Gore had 14 days to appeal the Feb.14 ruling to ask for an en banc review and 90 days to petition for a writ of certiorari.

The sheriff’s decision to concede on ‘may issue’ found support from the County Board of Supervisors.

“I believe the appeals court got this one right, and I have no problem with law-abiding citizens carrying concealed weapons in the name of self-defense,” County Supervisor Chairwoman Dianne Jacob said to UT San Diego.

With this decision, two of the three most populous counties in California have now turned their back on antiquated may issue guidelines for concealed carry. These two counties have a combined total of over six million residents–nearly one sixth of the total state population– and could soon grant tens of thousands of new permits under shall issue. Attorney General Kamala Harris could still request the 9th Circuit take another look at Peruta, which could tie the final outcome up for years. (Photo credit: Sacbee)

Where this leaves the other counties in the state at the moment is unclear. The Peruta v San Diego case just applies directly to San Diego County. Legally speaking each of the state’s other 58 counties could have to go through the court process to be made to accept self-defense as a reason for issuing a concealed carry permit.

However this is subject to speculation.

Noted 2nd Amendment scholar David Kopel, in his column at the Washington Post wrote Friday that, “Other counties–such as Los Angeles, Orange [which already has], and San Francisco–will have to follow San Diego’s lead and begin issuing permits to ordinary, law-abiding citizens who pass the requisite background checks and safety training requirements.”

The Peruta case could still be appealed by any of the 27 judges on the 9th Circuit, which would be rare.  A final option is that the California state attorney general, who, although not a party in the original case, can still intervene and ask for further review from the 9th Circuit. If that review is granted and fails, it can be appealed to the U.S. Supreme Court, thus tying up a final decision possibly for years.

Should both Harris and the other judges decline to pursue a review, its two counties down, 56 to go for ‘shall issue’ in California.