NJ: Bill compromise to cap magazines at 10 rounds but allow shooters to stop for coffee

A deal has been made in the New Jersey legislature on two bills, a pro-gun control bill that would ban all magazines larger than ten rounds and a pro-gun bill that would allow gun owners, hunters, sportsmen to stop on the way to the range or woods for food, emergencies or other “reasonable” stops.

The magazine limit bill, formally titled A2006 (pdf) , would limit magazine size to no more than ten rounds and was introduced by Assemblyman Louis Greenwald (D-Camden) in January.

The same bill was submitted to the New Jersey Assembly and passed last year, but was defeated in the state Senate when Senate president Steve Sweeney (D-Gloucester) blocked it from a vote.

However this session Sweeny has agreed to let the bill run its course in return for passage of a pro-gun bill that would allow shooters who are transiting from home to a shooting range to stop for “reasonable deviations,” which are currently not allowed.

What are “reasonable deviations?”

Well, according to the measure, stops for “collecting and discharging passengers; purchasing fuel, food and beverages, medicine or other supplies; use of a restroom; or contending with an emergency situation.”

“We’ve been part of this discussion and we’ve always said there has to be a limit on magazine size,” said Greenwald, the sponsor of the mag-limit bill. “There is a position now that everyone is comfortable with that will allow the passage of both bills.” 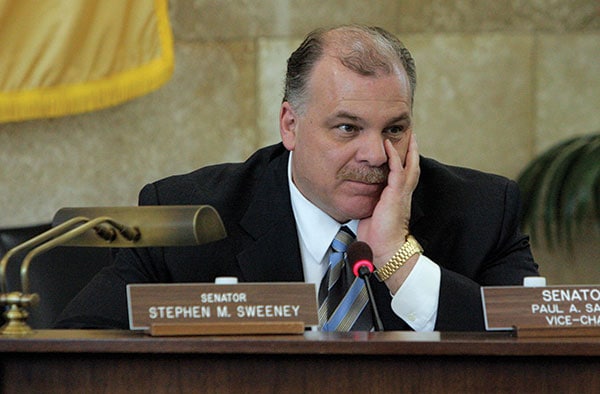 New Jersey State Senate President Stephen Sweeney has, according to reports, made a deal to let the magazine limit pass that body in exchange for letting gun owners make ‘reasonable’ stops on the way to the range or the woods with their gun. (Photo credit: NJ Monthly.com)

As mentioned, if enacted, A2006 would put the cap on what the state calls a ‘large capacity magazine’ at ten rounds.

Unlike other states, it would include fixed magazines as well, meaning that guns such as the .22 caliber Marin Model 60, which has an underbarrel tubular magazine, would not be allowed in New Jersey if passed. The current limit on magazines size in the state is 15 rounds, which retired police officers would still be able to possess.

“Nobody needs a 15-round ammunition magazine unless they are a domestic terrorist or a gangster,” Miller said. “We expect the legislative leadership to get behind this and the governor to see some sense.”

Miller and his group is known for staging protests outside of gun stores and calling for changes in gun laws.

In a statement on their website, the Association of New Jersey Rifle and Pistol Clubs (ANJRPC) is arguing that these limits are ill-conceived:

Arbitrary magazine limits do nothing to stop tragedy.  Those bent on doing evil will not follow a magazine ban, and even if they did, magazines can be changed quickly.  This kind of legislation gives criminals advantage over the law-abiding, and ties the hands of citizens in an emergency or home invasion.

Both bills are currently being reviewed by the Assembly Law and Public Safety Committee and will be debated in coming weeks.