Proposed budget cuts would shrink US military to smallest number since 1940, reduce other benefits (VIDEO) 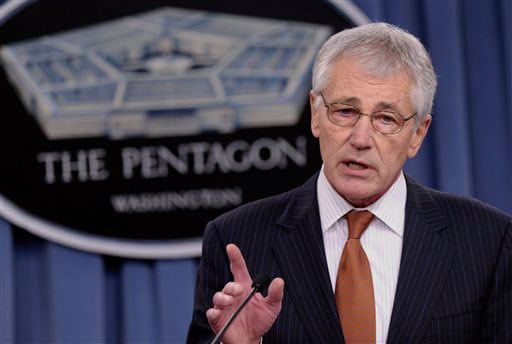 Defense Secretary Chuck Hagel said the budget cuts “would result in a smaller Army, but would help ensure the Army remains well-trained and clearly superior in arms and equipment.” (Photo credit: Fox)

A proposed budget presented by Defense Secretary Chuck Hagel this afternoon will shrink the United States Army to a size which has not been seen since before World War II.

On the condition of anonymity, several Pentagon officials shared some details of the plan with the New York Times yesterday.

The result of the proposed plan, according to the officials, would be a military force too small to carry out more than one large-scale operation at a time. The Army would still be large enough to defeat enemies who would challenge the U.S., but too small to become engaged in foreign wars at the same time.

In addition, the plan could also result in longer wars and greater casualties while leaving the door open for more precarious actions from our enemies.

“You have to always keep your institution prepared, but you can’t carry a large land-war Defense Department when there is no large land war,” one senior Pentagon official told the New York Times.

The plan would also cut the entire class of Air Force A-10 attack jets and the National Guard would see significant changes as well, including Apache attack helicopters – complete with their array of weapons – being transferred for active-duty use, while Black Hawk helicopters will go to the Reserves to be used for domestic disaster relief.

The Navy would still be able to purchase two destroyers and two attack submarines each year, but 11 aircraft carriers will be on reduced operating status, even though there was talk of retiring at least one. However, the fate of the aircraft carriers could likely change in the future with even tighter budget cuts.

Nonetheless, officials claim that, despite the massive cuts, the U.S. Army would still remain the world’s strongest.

Regardless, the size of the Army isn’t the only thing that will be reduced with the proposed plan, various military benefits will be cut as well.

General and flag officers would see a one-year freeze on their salaries, although basic pay for military personnel would increase by one percent, future raises would likely remain restrained after 2015.

Tax-free housing allowances for military personnel would also be on the decline, as would the subsidies for military commissaries, a place which many military families depend on for affordable groceries and other items. The decrease in subsidies would likely make these staples more expensive for soldiers and their families.

In addition, health insurance deductibles and co-pays would increase for some family members of active servicemen as well as some military retirees. However, there would not be any changes to retirement benefits for current military personnel.

Rep. Michael McCaul, R-Texas, chairman of the House Homeland Security Committee, fears that the cuts would reduce the readiness of the military and blames the current financial issues on the Obama administration and Congress.

“It’s all being sacrificed… on the altar of entitlements. This president cannot take on mandatory spending, so all we’ve done in the Congress – and this president – is basically cut discretionary spending,” McCaul told Fox News.

Yet the Pentagon press secretary, Navy Rear Adm. John Kirby said that Hagel’s proposals were drawn up only after consultation with military service chiefs.

“He has worked hard with the services to ensure that we continue to stand for the defense of our national interests – that whatever budget priorities we establish, we do so in keeping with our defense strategy and with a strong commitment to the men and women in uniform and to their families,” Kirby said.

“But he has also said that we have to face the realities of our time. We must be pragmatic. We can’t escape tough choices. He and the chiefs are willing to make those choices,” he added.

“Secretary Hagel has been clear that, while we do not want to, we ultimately must slow the growth of military pay and compensation,” Kirby concluded.