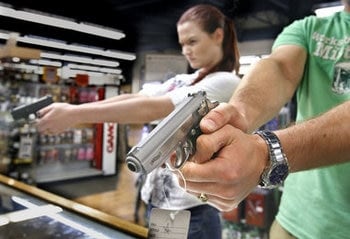 Two of the three Second Amendment cases declined by the Supreme Court Monday were petitions to allow adults 18-20 access to handguns for self-defense.

The U.S. Supreme Court declined to hear a volley of cases Monday that would have clarified the Second Amendment.

These three cases, NRA v. McGraw, NRA v. ATF, and Lane v. Holder addressed a number of issues from allowing 18-year-olds citizens to possess handguns to interpreting how those without access to a local FFL holder could transfer guns.

These cases are seen as a side-effect of the landmark Heller and McDonald cases heard before the Supreme Court in recent years. Both of these cases were decided on a razor thin margin of 5-4 votes in the nine-justice court.

In the 2008 Heller case, which struck down Washington, D.C.’s ban on handguns, the Supreme Court found that the right to keep and bear arms is an individual right, and that a firearm may be used for traditionally lawful purposes such as self-defense inside the home.

In the 2010 McDonald case the same court found that those 2nd Amendment rights apply to all levels of government, including the states, and that municipalities cannot circumvent them.

Because Heller found that the right to self-defense was covered by the Amendment and McDonald said that local laws could not preempt that right, the next logical step, according to the brief filed in NRA v McGraw by 2nd Amendment scholar Peter Clement, would be to grant young adults, over 18, the right to purchase and possess handguns. The case specifically challenged a set of Texas laws that disqualified an adult over 18 but under 21 from filing for a concealed carry permit in that state.

The Supreme Court declined to hear this case without comment, which it is not required to do.

The second case, NRA v ATF, challenged the 1968 Gun Control Act as enforced by the Bureau of Alcohol Tobacco, Firearms and Explosives that barred licensed gun dealers from selling handguns to otherwise qualified individuals in that same 18-20 age bracket.

“Young adults, many of whom have fought and sacrificed life and limb for their country, should not be prohibited from fully exercising their fundamental Right to Keep and Bear Arms,” Chris W. Cox, executive director of NRA’s Institute for Legislative Action has remarked on these cases previously. “The Second Amendment should receive no less respect than our other enumerated constitutional freedoms.”

As in the first case, the Supreme Court declined to hear this petition without comment.

“The NRA is disappointed,” said Jacqueline Isaacs, a spokesperson with NRA Public Affairs told Guns.com Monday. “But we remain committed to protecting the Second Amendment freedoms of all of America’s law-abiding gun owners.”

The third case, Lane v Holder,  asked for interpretation of the Gun Control Act of 1968, specifically as it applied to interstate transfer of guns. The issue arose when an experienced gun owner moved to the District of Columbia from Texas and could not bring her Glock with her because the District’s FFL holder had lost his lease and was no longer in business. Without an FFL holder to transfer the gun, it could not be imported into the District.

“The standing issue that we’re seeing with our case could be utilized to ban any number of things,” said Alan Gura, the groundbreaking attorney behind both the Heller and McDonald victories as well as the Lane case.  “Nothing in the 4th Circuit [Court] decision would suggest its logic is limited to firearms.”

“Had the federal government prohibited bookstores from selling books to out-of-state residents, no court would hold that impacted readers lack standing to challenge such a law under the First Amendment, ” wrote Gura in the petition to the court.

Nonetheless, as in two cases outlined above, the Supreme Court declined to hear the petition on Lane.

Even with the setbacks on these cases there is still a light at the end of the proverbial tunnel for supporters of the Second Amendment. “We are disappointed the Supreme Court did not take the opportunity to further clarify the scope of the Second Amendment. Meanwhile, Congress and state legislatures will and should continue the growing trend of increasing Americans’ firearms freedoms,” said Keane Monday.

While the Supreme Court seems content to not hear the issue of concealed carry for now, it may be forced to weigh-in on the debate soon.  Another important 2A case, Drake v. Jerejian, is set to be debated in the April Supreme Court meeting for inclusion on the 2014 docket.

This sentiment is echoed by Gura, who told Guns.com, ” It’s always disappointing when the court turns down a solid petition, but it’s important to remember that the court turns down countless petitions. It doesn’t portend anything in particular for the next compelling petition.”

“People spend too much effort trying to divine some meaning behind the denial of cert. We’re disappointed, we’ll move on, and we’ll see what happens with Drake in April,” Gura concluded.