The Nuge apologizes on CNN for 'subhuman mongrel' remark (VIDEO)

Hell must’ve froze over last night because I saw something I never thought I’d witness: The motor city madman supplicating at the altar of political correctness.

Arguably cowed by intrepid journalist Erin Burnett of CNN’s OutFront, Uncle Ted not only doubled down on an apology for calling the president “a subhuman mongrel,” which he did in an interview with Guns.com at SHOT Show 2014, but Nugent also promised to tone down his hell-raising, “Detroit street fighter rock ‘n’ roll stage rhetoric” for the benefit of the country.

BURNETT: Are you going to say that you’re never going to call people names again?

NUGENT: Live on Erin Burnett OutFront, CNN, Ted Nugent, remember the Alamo, February 24, 2014, I’m not going to call people names anymore. However, I have a little escape clause here, because when I’m on stage singing “Wang Dang Sweet Poontang,” would you give me permission to go overboard on occasion? Please, tell me you will.

BURNETT: I think that — I know you are trying to make slightly light of this, but to me these things are not light at all. Because in a country that you talk about is so polarized –

What the hell?! I think I speak for everyone when I say: Noooooo!

Think about it, do we really want rockstar guitarist Ted Nugent to speak like Charlie Rose?

Shoot, I know I don’t. As I said in a previous article, he’s not a serious candidate running for office, he’s not an elected official; he’s an entertainer who has a voice in American politics because he purposely says stuff to unnerve, unsettle, unhouse the monolith that is the mainstream media.

Likewise, so is Bill Maher.

From my vantage point, the political arena is an infinitely more lively place because we have these divisive, crude and often-times funny performers in it. Sure, you may vehemently disagree with what they say, but at least you know they’re telling you exactly how they feel about a subject — which is more than you can say about almost any politician in office, journalist on TV or bureaucrat working in government.

In short, in a world that is mired in bullshit, these guys man the pumps. 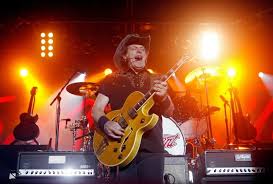 Ted Nugent playing the guitar like the hell-raising, rock legend he claims to be.

As far as I can tell, neither Maher nor Nugent hew to a party agenda, nor do they report to a board of editors, they don’t have constituents they need to placate or corporate donors they need to appease, and most importantly, they don’t worry about hurting someone’s feelings. They simply call it like they see it.

Well, I suppose after last night that’s not exactly the case with Nugent any longer.

Of course, there is an irony in this whole fiasco that’s worth pointing out as well. That is, more than anyone else, you know who loves inflammatory rhetoric?

The mainstream media. Sure, they’re quick to condemn people for using it, often echoing the platitude that we need to raise the level of discourse in this country, but at the same exact time, they love talking about it.

I mean, if the politically correct establishment that runs the media were really hell-bent on raising the level of discourse in this country, wouldn’t they simply just ignore comments made by rock legends and comedians?

Seems to me they would.

We don’t need to silence The Nuge (or Bill Maher) nor do we need him to be more polite, considerate and politically correct.   We just need Uncle Ted to be Uncle Ted.  And if you don’t like it, you can always change the channel.

(On a side note, I’m not sure whether “subhuman mongrel” is racist.  But even it if is, I don’t think Nugent’s a racist.  Similarly, when Maher calls Sarah Palin “a cunt,” which is undoubtedly misogynistic, I don’t necessarily believe he is a woman hater. I know, this is probably a discussion for a different day on a different forum but I think you judge a person overall on their actions, deeds rather than the words they say during an off-the-cuff monologue.)