CT: Those who missed gun registration deadline getting letters from state police 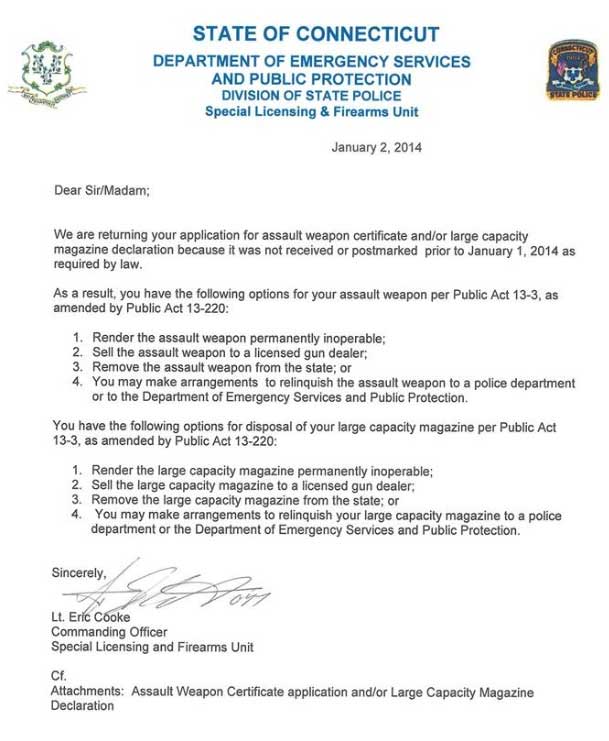 In Connecticut those gun owners who tried and failed to get their magazines and rifles registered in time are now finding letters in their mailbox from the state police, wanting their guns.

According to the Journal Inquirer, 106 rifle owners and 108 ‘large capacity magazine’ owners in Connecticut were recently sent letters from the state police advising them that they had missed the deadline for registering their now-illicit firearms and accessories.

The state knew these individuals had these items because their registration applications were sent in, but postmarked too late to be processed.

The letter, a copy of which seems to have been posted on a gun forum last month, advises the unsuccessful applicant that they immediately have to either:  (1) render the weapon or magazine permanently inoperable, (2) sell it to a licensed dealer, (3) remove it from the state, or (4) make arrangements to turn it in to the police or state Department of Emergency Management and Public Protection (the state police). The letter is signed by Lt. Eric Cooke, the Commanding Officer for Special Licensing and Firearms with the Connecticut State Police.

Once people realize they can’t keep the guns and magazines, “they’re going to get rid of them,” Michael P. Lawlor, the undersecretary for criminal justice policy and planning to Gov. Dannel P. Malloy, told the Journal Inquirer.

This effort comes as a postscript to the saga of the state’s mandatory registration scheme following implementation of tough new gun laws in 2013.

In early January Connecticut State Police identified 266 weapons registrations and 506 magazine declarations that they received after the January deadline that were refused. However, in a deal brokered with the state Governor’s office last week, those mailed applications postmarked by Jan. 4 would be processed.

The more than 200 who received notifications from the state police this week were owners whose applications were postmarked after that date.

Rep. Penny Bacchiochi, (R-Stafford), has asked the legislature’s Public Safety and Security Committee to consider a bill that would delay the registration deadline by six months.

“I think a lot of people, believe it or not, are still unaware of the new law that was passed,” Bacchiochi said.

“I am not surprised. This is a result of late registration. It’s a little disturbing to see this but its par for the course,” said Scott Wilson, President of the Connecticut Citizens Defense League, in a call with Guns.com Tuesday about the letters that are going out.

“I would only wish that the Governor’s office, and law enforcement in the state of Connecticut would choose their time and resources a little more wisely to get violent criminals off the streets rather than otherwise law-abiding citizens.”

Emails to the Connecticut Department of Emergency Management and Public Protection and Lt. Cooke by Guns.com were not responded to in time for publication.

Guns.com reached out to the Connecticut Department of Emergency Services and Public Protection about this letter on Feb.25 and received official comment back from the agency today as follows via email:

“Yes, this letter was sent to those gun owners whose registration were received past the deadline.  Gun owners had several months to register their guns after the legislature passed the law. This letter was an effort to assist gun owners.”– Connecticut Department of Emergency Services and Public Protection.