A Facebook photo of a baby holding a rifle taken at a Woodbridge, Connecticut, gun store has sparked public outcry.

The photo of the six-month-old baby girl holding the bolt-action rifle was taken at Woodbridge Firearms Trading Post and shared on Facebook. Though the bolt was retracted and the baby’s father, Christopher Duffy, said he safety checked the weapon as well, many have expressed their concerns over the incident, WTNH reports.

“After everything that happened in Connecticut with Sandy Hook and everything that’s going on with the gun laws, why would you have your baby holding a gun – a big gun?” said Bryanna Wingate.

But Duffy felt comfortable with his decision and didn’t seem to mind the criticism he was receiving for the photo. 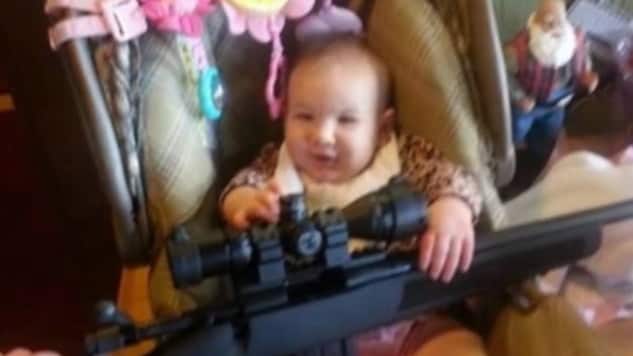 This photo of a baby holding a rifle sparked public outcry.

Mike Majewski, co-owner of Woodbridge Firearms Trading Post, has no problem with the photo and is happy to use his store and Facebook page as a place for the community to share things.

“If someone wants to share something with the rest of the community, I have no problem posting it on the page,” Majewski said.

Duffy ended up buying the rifle.