It was a terrifying night for folks inside the Presidente Supermarket when the sword-wielding suspect walked in and said he was going to kill everyone. (Photo credit: CBS)

A man was shot by an armed security guard in Miami’s Little Havana last Wednesday night when he entered a supermarket, armed with a sword, and started attacking people inside.

Officer Kenia Reyes with the Miami Police Department told local media that the man, who was later identified as 43-year-old Hector Rivaflecha Hechavarria, simply walked into the store about 9:45 p.m. carrying a sword and said he was going to kill everybody.

“He must be crazy or drunk or something,” said long-time customer Mercedes Lopez.

Nonetheless, Hechavarria no doubt entered the supermarket with ill intentions and within seconds confronted a 32-year-old female customer, Ninoska Aranglubel, cutting her elbow with the blade before the store’s security guard, 47-year-old Jose Antonio Mendoza, rushed to subdue the suspect.

Mendoza warned Hechavarria to drop his weapon, but when he refused the security guard felt he had no choice but to protect the lives of those around him. He fired several shots, striking Hechavarria.

However, the sword-wielding suspect still wasn’t ready to give up the fight, which then spilled into the parking lot. During the course of the physical altercation outside, Hechavarria struck Mendoza over the head. And when the suspect still refused to drop his weapon, the security guard fire shots once again. 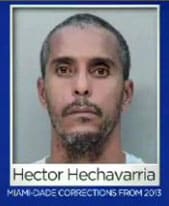 Hechavarria was transported to a hospital where he was last reported to be in critical condition. If he survives, he will face charges for premeditated attempted murder with a deadly weapon.

Mendoza and Aranglubel were also treated for non-life threatening injuries they received during the incident.

Nearby residents and regular supermarket customers were shocked to hear about the attack in the area which they described as being a good neighborhood.

“Everyone knows each other, the people who work in the meat, the dairy, the cashiers. So it’s kind of a neighborhood atmosphere,” customer Mike Rodriguez told a local NBC affiliate, also adding that he felt this was probably an isolated incident.

Meanwhile, support abounds for Mendoza, who is being called a hero for protecting the lives of those involved.