Rick Dyer is a Bigfoot hunter and self-proclaimed master tracker. He claimed to have slayed the mythical beast in 2012 and now the body is finally on display in a flea market in Houston, Breitbart reports.

Dyer says he lured Bigfoot, or “Hank,” out hiding by nailing Wal-Mart ribs to a tree. He’s had the body of Sasquatch for some time after that, but didn’t want to show off his prize to the world until he had conducted extensive DNA testing to verify the creature really was Bigfoot, and not a retrofitted Chewbacca costume. 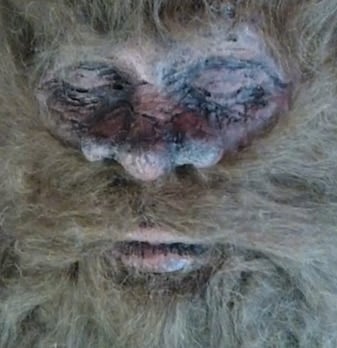 Many are convinced of Dyer’s Bigfoot claims, but some still remain skeptical.

On Sunday, the corpse was displayed at Trader’s Village, the first stop among many on Dyer’s Bigfoot tour. Dyer charged $20 admission for the opportunity to peer into the glass coffin.

“We got here a day early and we just wanted to show as many people as possible,” Dyer said.

Some were sold on the validity of the Dyer’s claims, while others still remained skeptical.

“It’s amazing when you go inside, you feel different,” said one visitor. “I had never seen anything like this before, only on the Discovery Channel.”

But Mario Lopez wasn’t buying it, saying, “I’m not convinced. I believe the Roger Patterson footage is authentic because you can see the muscles and everything on there, but this one was kind of different. But he did mention that after the autopsy the body kind of changes.”

So far, Dyer has not furnished the DNA evidence he claims to have had analyzed, and when asked when he would show the public, he said, “When I want to.”