Video has been released of the Kansas City, Missouri, police officer that fatally shot a newlywed firefighter during a tussle that took place Dec. 1, 2013.

The off-duty firefighter, Anthony Bruno, 26, had just finished celebrating at his wedding reception with his new wife, Stephanie, 29, when he found himself in trouble. Bruno hailed a cab and punched the driver during an argument over the fare. Kansas City police officer Donald Hubbard, 42, who was working off-duty as a security guard for the Marriott Hotel, quickly intervened. In the ensuing altercation, Hubbard shot Bruno twice, LA Times reports.

“Throughout my entire contact with the suspect, I gave him numerous verbal commands to give me his hands and top stop resisting,” Hubbard told investigators. “In my attempts to place handcuffs on the suspect, he continued to resist and we eventually went to the ground.” 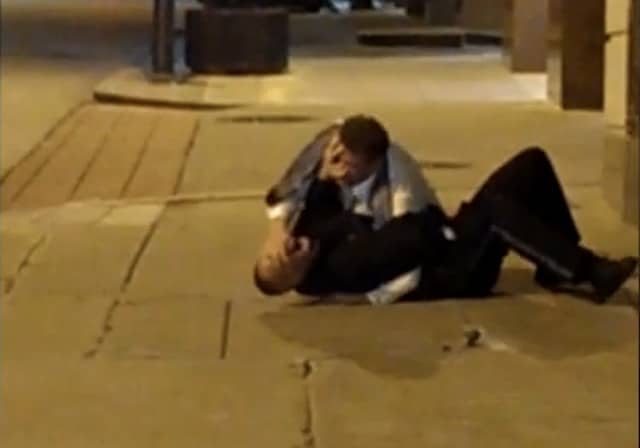 “He was on top of me and I was in an extremely vulnerable position, and I was exhausted from the struggle with the suspect,” Hubbard said. “I don’t know how many times he struck me, but I started to black out and saw lines across my eyes. He continued to strike me and I started to lose consciousness, and I believed the suspect was not going to stop hitting me until he killed me. I feared for my life and I drew my weapon, fired two shots center mass.”

According to Officer.com, alcohol may have been a factor but Stephanie told police neither she nor her husband were drunk.

Bruno was transported to an area hospital, where he was pronounced dead. Hubbard was also taken to the hospital to be treated for a broken eye socket, fractured cheekbone, a laceration above his left eye that required stitches, and loss of feeling in the left side of his face.

Police said Tuesday Hubbard has since returned to work.