California gun parts maker at odds with city over billboard 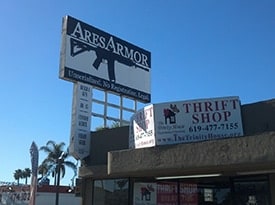 At issue is the billboard over Ares Armor in National City, California, which the city says was built without the proper permits. (Photo credit: Ares Armor)

Ares Armor, a veteran-owned small business in National City, California, that specializes in 80 percent lowers and tactical accessories is at odds with the city it calls home over its billboard.

The story began in late November when the store refaced the sign at their new National City, California, store. On the sign was a silhouette image of an AR-15-style, modern sporting rifle under a banner with the company name and the words “Unserialized. No Registration. Legal.” across the bottom.

Ares, known for the 80 percent AR lowers, Rudius 1911 kits and EFFIN-A stackable compensators, is a solid player in the do-it-yourself gun market. They also have a history of poking the gun control lobby, even registering the domain Senator Feinstein to cross link it to their website.

Within days the company had received word, second hand according to a statement on its website, that at least one member of the City Council did not like the sign.

On Jan. 18 the City’s Code Enforcement Department issued Ares a citation that stated the sign at their location had been recently refaced ‘without the necessary permits’ and that the store was in violation of municipal code. 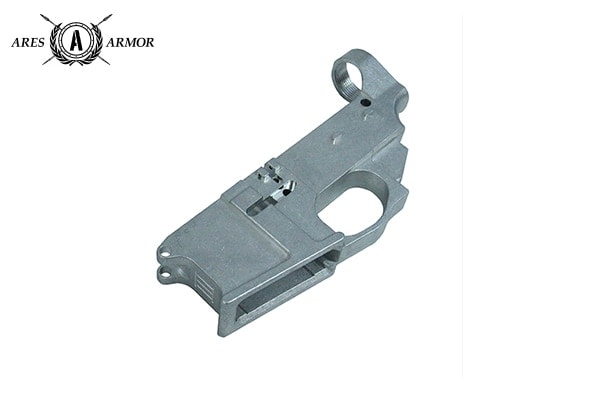 Ares is well known for its line of 80 percent lowers, which are legal to buy without an FFL (Photo credit: Ares Armor)

The building had existed for 90 years before Ares moved in and, according to Ares, the city had never taken issue with a sign on the property before.

“The Local Government of National City thinks it is acceptable to re-interpret their own city code to suite their political agenda if a message appears that does not suite their liking,” wrote Dimitri Karras, CEO of Ares Armor on the company’s website.

“They have chosen to attack us based on opposing political views,” he continued. “They have abused their elected positions in order to silence those who do not agree with them. We will not be removing our sign. I will go to jail first. If it’s a fight they want, it is a fight they shall have.”

The mayor of National City contends that it’s an issue of the city’s ordinance, not of harassing a local business. In an interview with Guns.com Wednesday he advised that the city revised their general plan in 1997 to ban rooftop signs.

Existing signs, like the one on the building that Ares Armor now occupies, were grandfathered, however in 2012 the city changed their ordinance for the grandfather to break if any building was taken over by a new tenant. Since Ares moved in at the end of 2013, the city contends that the sign is now illegal.

“The sign had been up there for decades, that’s not an argument,” said Ron Morrison, Mayor of National City to Guns.com.

“Our ordinance is content-neutral. It has nothing to do with the content of the sign. We told them they can take the exact same sign, the same graphics, and put it on the front of their building,” he added. “That’s what the whole issue is. This doesn’t have anything to do with the Second Amendment, or the First Amendment. They have every right to put that message on their building if they want to.” 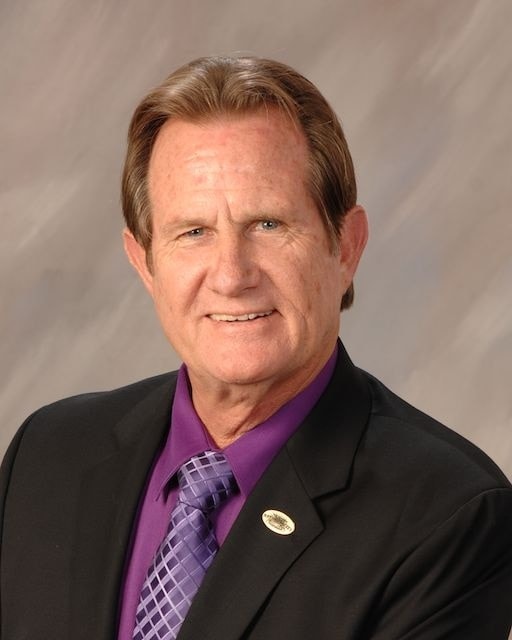 National City Mayor Ron Morrison contends that its not an issue of content but of an old rooftop sign that is no longer grandfathered. (Photo credit: National City)

“This was an ordinance that was passed before they moved it. It was not a reaction to them, ” Morrison concluded.

Meanwhile, over the past two months, Karras has been publicly chronicling his fight with the city’s planning division, mayor, and city council.

“The city now wants us to spend a ridiculous amount of money in another appeal, but what we are looking at is to see if we can file in federal court before doing that because it is evident the decision is already made before we can get there,” explained Karras.

“It’s ludicrous the stuff they are trying to pull right now. They are sticking to their guns.”

Nevertheless, so is Karras, a marine veteran.

“The sign is not coming down. I will be in jail or dead before that sign comes down.”