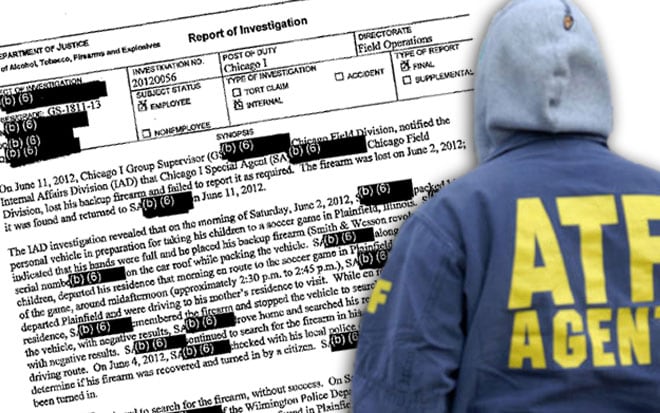 Even with some of the details blacked out, the report still had enough information to cause some concern. (Photo credit: The Journal Sentinel)

Emerging from the latest probe into the botched actions of the ATF, the Journal Sentinel discovered that the over the last four years at least 49 guns have turned up lost or stolen from ATF agents.

Although the reports didn’t indicate that the number also included missing firearms – which are considered by the ATF to be a category separate from lost or stolen – the reports did reveal that not only were agency protocols surrounding firearms not followed, but it’s unclear if the responsible agents were properly disciplined either.

According to the ATF, agents who are not in immediate control of their bureau-issued firearms should ensure that the guns “shall be stored in secured, locked locations.” And while firearms may be stored in a lockbox inside a vehicle, they are not supposed to be left overnight or in between shifts, the report indicated.

And although the ATF would not disclose specifics of their policies concerning the storage of firearms, the report did state that officials “must exercise good judgment and common sense when assessing the security of Bureau-issued firearms.”

However, according to the reports, this was hardly the case in several incidents.

While some of the firearms were lost or stolen after being left under car seats, in glove compartments or even on the top of a car before driving away, others were left in public bathroom stalls, hospitals, outside a movie theater and even on a plane.

One agent discovered that his ATF-issued Glock was missing – and never found – after he had enjoyed a night of drinking with fellow agents and friends at a Los Angeles bar.

Another agent’s missing Smith & Wesson .357 was found sitting on top of a storm drain by two 6-year-old boys. The agent’s gun had been missing for several days, although he didn’t even bother to report it until the story made headlines in the local newspaper. However, in the report the agent admitted that had the story not broke headlines he would have never informed his supervisor of the lost firearm.

In addition, a report from the Office of the Inspector General with the U.S. Department of Justice showed that the ATF had – by at least double – more lost, stolen and missing firearms than any other law enforcement agency.

And for an agency whose primary focus is firearms, some find those statistics completely unacceptable.

“There’s no doubt that people leave things around, but when you have an agency whose task it is to focus on firearms, it would seem to me like an extra measure of care would be called for,” said David Harris, a professor at the University of Pittsburgh School of Law and an expert on law enforcement tactics and regulation. “If they are doing this at a rate that is higher than others (in law enforcement), it is something to worry about.”

Harris places blame, in part, on poor communication from leadership and lack of adequate consequences. In fact, in 2007 the ATF changed its policy regarding first-time loss of a weapon from a minimum suspension of three unpaid days to only one. A move which, according to the ATF, was made to encourage agents to report such losses more quickly.

“You have to make it real. …People have to see there are real consequences,” Harris added. “If you don’t do that, you might as well not have the rules. It’s just window dressing.”