Want to support Ares Armor? Check out these amazing deals on AR uppers 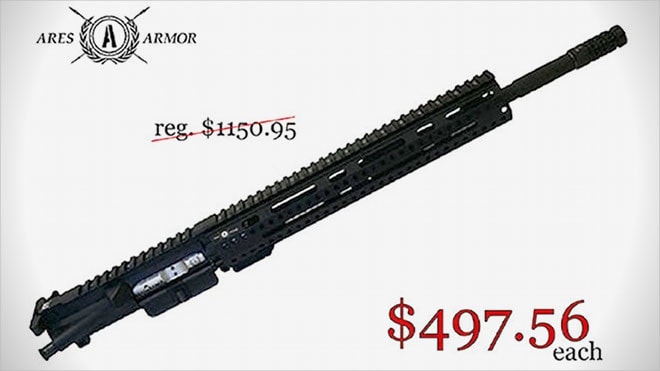 Ares Armor, a small AR specialty shop working out of National City, California, is facing a lot of local pressure to pull down their billboard advertising their completely legal 80 percent lower receivers.

“They have chosen to attack us based on opposing political views,” said Dimitri Karras, Ares CEO. “They have abused their elected positions in order to silence those who do not agree with them. We will not be removing our sign. I will go to jail first. If it’s a fight they want, it is a fight they shall have.”

They’re currently taking pre-orders for their new 5.56 NATO pistol and carbine uppers and they are priced to move at just $649 and $497, respectively.

Ares says you will not find better uppers on the market, and that’s absolutely true given the price. And these aren’t no-frills uppers to say the least.

First up is the Cronus upper for pistol and short-barreled rifle builds. It features a 7.5-inch black nitride finished barrel fit with an Effin-A MkII tunable compensator and a free-floating 5.5-inch handguard. The barrel has a one-in-seven twist for longer, heavier bullets that perform the best with shorter barrels.

The upper and extended charging handle are forged 7075 aluminum and the handguard is 6061 and all are given a hard-anodized finish. The 8620 and carrier is chrome-lined on the interior and parkerized outside while the 9310 bolt has black nitride finish. Black nitride is harder and smoother than chrome and generally lasts longer while also promoting improved accuracy. The bolt carrier group is fully heat-treated and full-auto rated.

The carbine-length Harpe upper shares many features, specifically the construction of the shorter Cronus upper but is built around a 16-inch barrel and uses an extended 13-inch free-floating handguard. The handguards on both uppers are designed in-house by Ares Armor.

One difference with the Harpe is that it’s handguard does not have fixed quad rails, instead, it is modular for use with detachable rail sections which are included. It also has a nickel-boron finished bolt carrier group. The finish is extremely resistant to carbon buildup and is easy to clean while being somewhat self-lubricating. Like the Cronus, the Harpe’s bolt carrier group is also full-auto rated.

Both uppers use carbine-length gas systems and measure in at .750-inches at the gas block.

Frankly, it would be next to impossible to put together similar uppers by yourself at these prices. They are introductory prices and won’t last forever. Regular pricing will be just over $1,100 for each once this deal is over.

That includes the Effin-A MkII compensators, which normally run about $100. These unique muzzle devices have 24 ports that can be left open or closed off individually, letting the user tune the exhaust gas to suit their specific shooting needs. The MkII is still lightweight at just 2.5 ounces.

Ares is taking pre-orders for these now with delivery expected within 90 days.

If you want to support a company fighting to do business the way they want to do business, head over to their website to find out more.