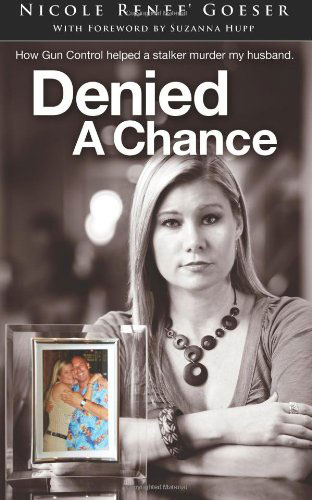 Following the murder of her husband, Nicole Goeser wrote a book describing the incident and the “ill-conceived” laws which left her defenseless. (Photo credit: Amazon)

Nicole Goeser lost her husband when he was shot and killed by a crazed gunman in a Tennessee bar back in 2009. She blames, in part, the state’s laws that prohibited her from carrying her own handgun into the establishment and shared her story in an opinion piece on Fox News this week, coinciding with a segment on Investigation Discovery Network.

Goeser had a valid concealed carry permit and was legally allowed to carry a pistol, which she normally did for self-defense.

She and her husband, Ben, owned a mobile karaoke business and the restaurant in which they were set up that night served alcohol, prohibiting Goeser from legally carrying her handgun into the establishment.

She kept her gun locked in her car outside while the couple worked inside.

However, the man who would claim her husband’s life simply ignored the “No Guns Allowed” sign posted outside and carried his handgun inside anyway, concealed under his jacket.

“It was a normal Thursday night, until 10:30 p.m. rolled around,” Goeser said, recalling the “eerie feeling” which came over her when she saw him.

Goeser admitted that the man had never actually threatened her before, “but he was definitely creepy.” So much so that she had blocked him from social media after he sent her inappropriate messages. Goeser’s husband had also asked him to leave her alone, to no avail.

As soon as she saw the man walk into the establishment, she immediately knew something wasn’t right. She just didn’t realize at that point just how wrong it would end up being.

Goeser asked the management to remove the man from the establishment, but when they approached him, the man pulled out a .45-caliber pistol and shot Ben a total of six times while his horrified wife watched in terror, unable to do anything about it.

“We all have a fight or flight response when we sense danger. We make decisions based on the options we have at that moment,” Goeser wrote in the Fox News piece. “My only option that night was flight. Fight was not something I would have been able to follow through with because I was denied that chance. That basic human right was taken from me by a Legislature that unintentionally helped a predator hunt down his prey.”

Fortunately, there was a United States Marine in the crowd that night who quickly intervened and was able to tackle and subdue the man until police arrived in what witnesses say was about three minutes later.

Goeser recalled the familiar saying, “When seconds count, the police are only minutes away,” but added, “I can tell you that when something so terrible is happening to yourself or someone you love, even three minutes seems like an eternity.”

Tragically, Ben did not survive his injuries.

Since his death, the laws in Tennessee have changed, now allowing permit holders to carry into alcohol-serving establishments as long as the permit holder is not consuming alcohol and there aren’t any “No Guns Allowed” signs posted.

Nearly four years later, Goeser continues to be an activist for Second Amendment rights. In 2012 she received the National Rifle Association’s Sybil Ludington Women’s Freedom Award recognizing her efforts in working to protect those rights.

In addition, she authored the book “Denied a Chance: How gun control helped a stalker murder my husband,” in which she details the events surrounding her husband’s death and the justice she sought afterwards to ensure that others did not become victims of the “ill-conceived” laws designed to protect them.

“Evil can visit us anywhere,” Goeser concludes. “Signs posted on doors declaring ‘no guns allowed’ do nothing to protect any of us.”