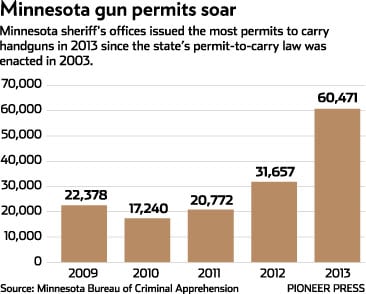 The numbers of concealed carry permits applied for by Minnesota residents have doubled in the past year and nearly tripled since 2009. (Photo credit: Twincities.com)

The land of 10,000 Lakes is now also the land of rising concealed carry permits.

According to the Minnesota Bureau of Criminal Apprehension, there are now over 165,000 residents in the state with permits to carry a concealed weapon.

Andrew Rothman, president of the Minnesota Gun Owners Civil Rights Alliance, estimates about 4 percent of adults eligible in Minnesota to obtain carry permits now have them and believes the sharp increase in 2013 was caused by a combination of the December 2012 mass shooting at Sandy Hook Elementary School in Newtown, Connecticut, and the resulting calls for tighter restrictions on guns in Minnesota and across the nation.

Minnesota issues permits through county sheriffs who charge a fee not to exceed $100 and conduct state and local background checks before issuing the five-year license.  All applicants have to complete a 3-4 hour training course that includes live fire and meets the guidelines of the Minnesota Personal Protection Act.

Not all in the state are happy about the increase, however.

Heather Martens, executive director of Protect Minnesota, a gun-control organization, said studies have shown that having a gun in a home “raises the risk, especially in situations of domestic violence that someone is going to be killed.”

Meanwhile, the phenomenon of rapidly climbing numbers of concealed carry permits across the country has become well established in recent months.

New Mexico, like Minnesota, saw their number of CCW applications double in 2013.  Kansas recently saw its numbers of CCW applicants double as well, skyrocketing from 12,300 to over 25,000 in 2013. Colorado processed twice as many applications in just the first six months of last year when compared to all of 2012.