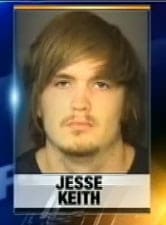 Jesse Keith is accused of stealing from his own neighbors. (Photo credit: WSOCTV)

The homeowner called the police after discovering a man wearing a surgical mask, apparently in an attempt to hide his identity, searching through a vehicle in his detached garage. While waiting for the police to arrive, the homeowner, armed with a handgun, chased the suspect through his yard, firing several warning shots into the air.

Authorities caught the suspect, who was later identified as Jesse Keith, a short distant from the scene and quickly discovered why the man was hiding behind the guise of a surgical mask. It turned out that Keith was a nearby neighbor of his alleged victims, living just one street over from the latest burglary attempt.

Police also discovered that Keith had targeted a nearby church as well. Reverend Francis Peters, who had been in the neighborhood for only a couple of weeks, discovered that the church’s outside electrical box had recently been tampered with. And although theft of electrical wires has become a common occurrence as the price for the salvage of copper wires continues to rise, it doesn’t appear that was Keith’s intentions.

“I think he figured there was an alarm system here and he was trying to shut that off. He didn’t cut any wires or anything like that that I (saw),” Peters told reporters. “Had he have cut them in that box, he would have gotten an awful surprise.”

But Keith was no doubt surprised by the armed homeowner when he left the church for another heist.

Authorities also believe that Keith may be responsible for at least eight other recent burglaries in the area, possibly more, in which garages and some unlocked vehicles were targeted and others were broken into after windows were smashed.

Keith remains in the Union County jail on a $50,000 bond and faces burglary charges.