Faith and firearms, an unlikely duo?

Not so, says the Kentucky Baptist Convention, which regularly holds “Second Amendment Celebrations” at churches across the state as a way to proselytize unbelievers. 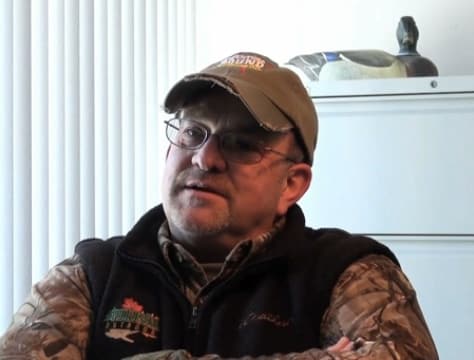 Chuck McAlister, who hosts the events, told the Kentucky Courier Journal that in this day and age churches have to be more creative in their outreach to the irreligious — and, as the group’s communication director Roger Alford said, “rednecks.”

“The day of hanging a banner in front of your church and saying you’re having a revival and expecting the community to show up is over,” said McAlister, a former pastor who hosted the religious-themed “Adventure Bound Outdoors” on the Outdoor Channel for 16 years.

“You have to know the hook that will attract people, and hunting is huge in Kentucky,” he added. “So we get in there and burp and scratch and talk about the right to bear arms and that stuff.”

The Lone Oak Baptist Church in Paducah, Kentucky, is holding an event this Thursday in which 1,000 people are expected to attend. While there, folks will enter in the gun raffle which features 25 different handguns, rifles and shotguns and receive a free steak dinner.

To explain how gun rights and the Gospel intersect, the Lone Oak Baptist Church released a description of the event:

Our nation’s founders provided for our freedom to worship as we choose and our freedom to protect and provide for ourselves and our families. The Second Amendment Celebration (formerly Beast Feast) recognizes the rights and responsibilities of those freedoms while celebrating both through appreciation of the outdoors and God’s provisions with the purpose to point people to Christ.

Of course, not every pious individual is on board with using gun raffles as a means to attract potential converts.

“How ironic to use guns to lure men in to hear a message about Jesus, who said, ‘Put away the sword,'” Rev. Joe Phelps, pastor of Louisville’s independent Highland Baptist Church, told the Kentucky Courier Journal.

“Giveaways for God” seem wrong, he continued. “Can you picture Jesus giving away guns, or toasters or raffle tickets? … He gave away bread once, but that was as a sign, not a sales pitch.”

Though, one may have a hard time arguing with the results. Last year, for example, 1,678 men made “professions of faith” at the 50 or so events the Kentucky Baptist Convention organized, noted McAlister.

“We have found that the number of unchurched men who will show up will be in direct proportion to the number of guns you give away,” he explained.

So, it would appear some folks may come for the free guns but may also leave with a new found relationship with Jesus.

In the video below, McAlister explains more about affinity evangelism and the activities and methods his group used to win people to Christ.