Browning Superposed and Citori Shotguns: A tradition of innovation meets an innovation of tradition

With over 120 of the world’s most innovative firearms patents to his credit, you may find it almost poetic that John Moses Browning’s last invention was a double-barreled shotgun, the Browning superposed. Well, “innovations” aside, this traditional over and under scattergun is considered by many wingshooters and sporting clay hobbyists to be just about one of his best ideas.

Browning Superposed over and under shotgun.

The over and under shotgun design evolved out of a tradition of side by side shotguns. Today, o/u shotguns are standard fare on trap courses and pheasant fields alike.

Shotguns evolved from the old smoothbore muskets of the colonial period. You don’t think about it much today but the single and double-barreled shotgun was the most popular firearm of the middle and late 19th century. The thing was many of these guns were side-by-side (SXS) guns, which, while they do offer twice the firepower of a single barreled gun, have issues with proper aim points, and recoil, which can result in missed shots and, in the long run, broken stocks. The concept of the stacked barrel shotgun, where one barrel rests atop the other, also called over and under (O/U), allowed for better pointability on a double gun, which equated to more accuracy.

Even though Browning himself had developed a number of more advanced shotguns, specifically the world’s first mass production semi-auto in the Auto-5, the O/U shotgun retained a niche following for those who loved them and for good reason. Both barrels will discharge dead center and, even compared to modern autoloaders, firing the second barrel can be very fast and on target. Moreover, with fewer working parts, the guns were much more reliable under extreme field conditions or after long periods of storage.

The sticker was getting an English-made Boss gun could cost a small fortune even in the 1920s, so with that in mind, John Browning began work on his affordable ‘super-imposed’ shotgun in 1922.

Design of the original

The Superposed was truly Browning’s twist on a concept that had been around for a minute. The Boss model over and under, patented in 1909 by John Robertson in England, beat Browning to the basic concept, but his new shotgun in many ways perfected it. 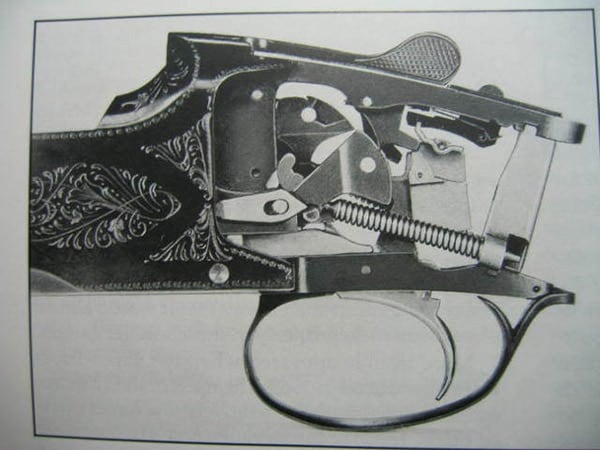 Mechanical trigger on a Browning Superposed.

Unlike many doubleguns before it, the Superimposed had but a single selective trigger to fire each barrel interchangeably, rather than the more common twin-trigger arrangement. The selector on this trigger could be set to fire either the over or under barrel first, then would reset to the next ready barrel automatically. The boxlock action cracked open on a full-length hinge pin just enough to allow a pair of mated extractors to shoot the spent hulls out when firing, clearing the way for the next set.  A tapered locking bolt and recess ensure that the gun stays rock solid when shut, even if opened and closed thousands of times. 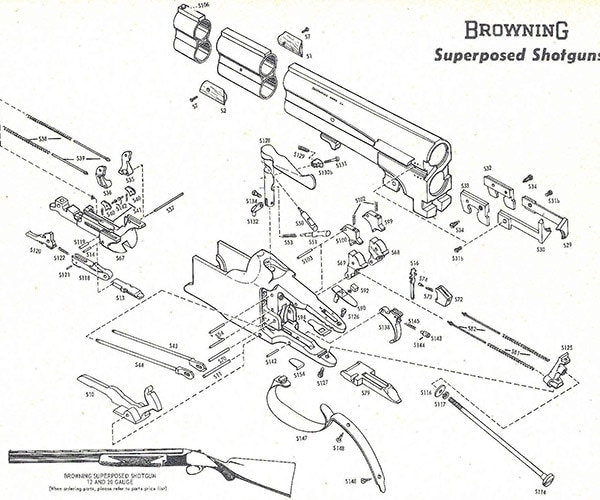 The gun, even though it had some 70 parts, was utterly reliable, proving almost impossible to jam due to its lack of moving parts. Unlike other O/Us that required the foregrip to be removed before the vented rib barrels (another innovation) could be taken off the frame, the Superposed mated the whole assembly together. Overall, the mating of the gun was perfectly aligned, strong as an ox, and simple enough to teach to anyone.

The selector button to the rear decides, which barrel fires first. The lever on the top opens the action. 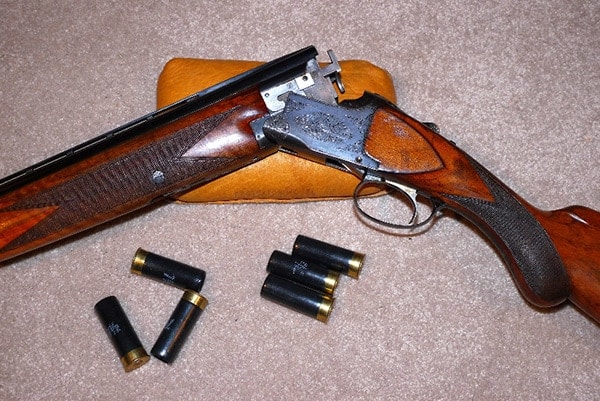 This gun was an exercise in family values. Just as its twin barrels were mated together and inseparable, when John Browning died in 1926 without the Superposed finished, his son Val stepped in and completed the last work of his father. After not being able to sell a US-based maker on the ‘dated’ gun, (after all, who would want a doublebarrel shotgun in a world of pumps and automatics!), Val convinced Fabrique Nationale in Belgium that the gun was marketable. By 1928, it was debuted by FN as the Browning Superposed.

Death and rebirth as the Citori 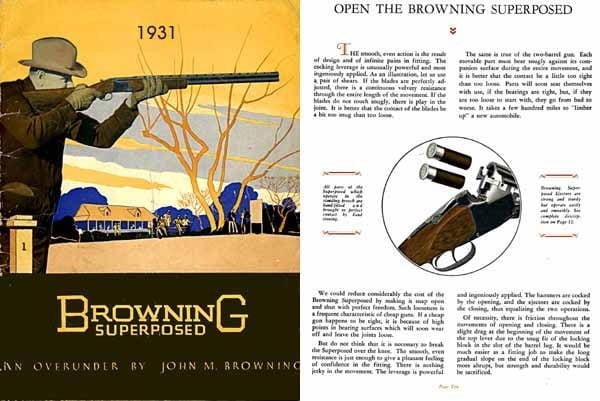 The Superposed was the first commercially successful O/U shotgun ever made.

Originally chambered only in 12-gauge, this decision marked another departure from tradition as the most common shotgun shell in the US at the time was the 16-gauge. In almost constant production from the 1930s to the 1970s in Belgium (with a break for World War 2), nearly 200,000 of these guns were born.

Each was handmade with over 170 steps, not counting any engraving. 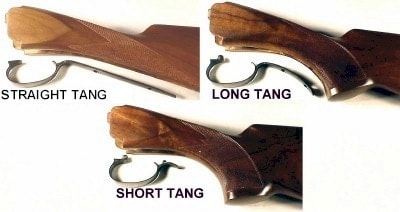 Superposed had several stock tang styles. These do not go unnoticed by serious collectors.

This led the gun to have a $100 introductory price in 1928, which translates to about $1400 in today’s terms. While not affordable for the shooter on a fixed income, it was still obtainable as a middle-class hunting shotgun, much like the Ruger Red Label of today.

By the late 1960s however, this price had escalated to the point that they were no longer affordable and plastics started to creep into the manufacturing process, replacing bone in the many inlay applications.

In 1973, FN/Browning contracted with the Japanese firm of Miroku in Nangoku to begin producing a dumbed down Superposed. As a nod to the fact that this gun’s manufacture was philosophically different from the original, this new creation was labeled the Citori—an abstract, with no meaning in any language and somewhat ironic moniker given that this new gun would rise to prominence while the old gun faded away.

The Citori took off where the superposed left off and is really just the same gun with a few manufacturing changes to make it more affordable.

By 1977, with Browning Arms owned solely by FN, the Superposed did not appear in the company’s catalog and the torch passed on to the Citori. The year before, the most basic Belgian Superposed ran $780 ($3300 today) while the Japanese-cloned Citori cost $325 ($1400 today). It may seem the affordable price of an O/U for the American market is tied to that magic figure.

Citori shotgun in the box. 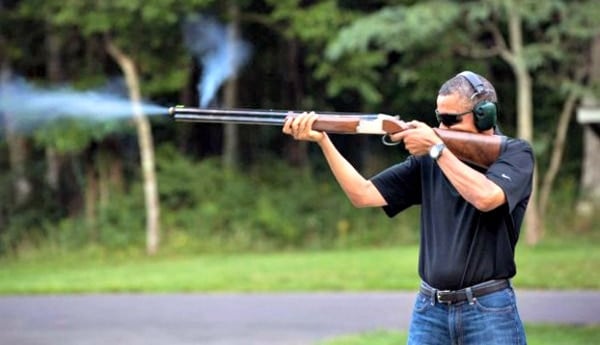 In itself, the Citori is not a bad gun by any stretch, it just admittedly lacks the refinement of the Superposed. Cost savings were realized by a more streamlined and less ‘old-world’ manufacturing process as well as minor modifications to the gun itself to speed production.

Always made in Japan, it has a good overall design inherited from the Superposed and is now a staple of the Browning line, it is sold in more than 40 variants. These include everything from .410 to 12 gauge (including some of the only factory produced 16-gauges still made), combination guns with different gauges, barrel lengths from 24-34″, custom finishes, stocks, etc. 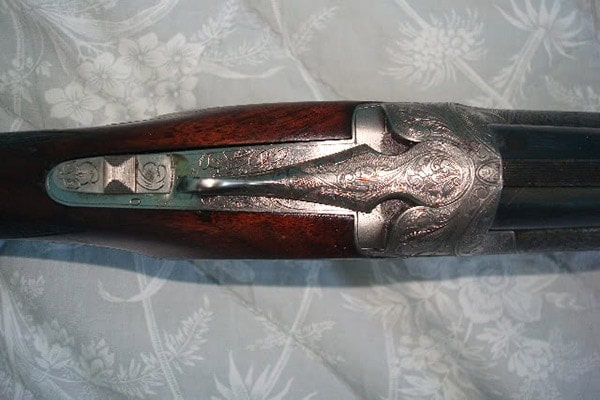 Of course, today there are some very nice grade Citoris out there as witness by this engraved 16 gauge.

Without question, they have picked up John and Val Browning’s O/U baton and have run with it.

A Superposed with extra sets of barrels is quite the investment. 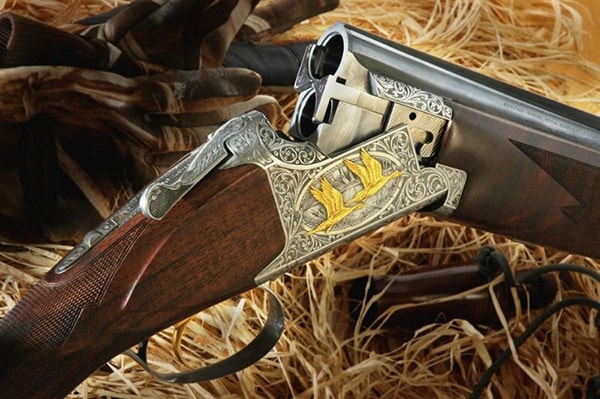 While there are thousands of Browning over/unders out there, these guns can run the gamut from plain, non-engraved, shooting examples for as low as $800 to guns that Midas himself would have a hard time buying. As with any collectable rifle, rare models, early models, marginalized calibers, and extremely ornate pieces garner much higher prices. Early pre-1939 Superposed have double triggers, the Browning single stage not being perfected by Val until that time. Therefore, if you bump into a FN O/U with double triggers, pay close attention to it. 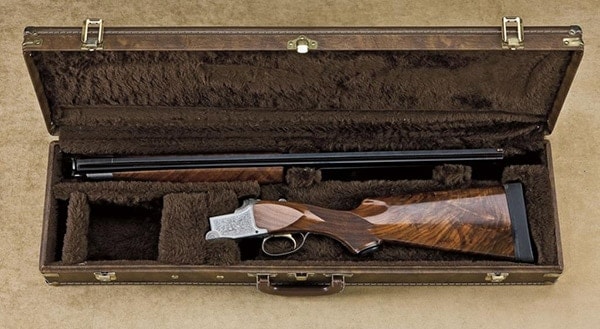 These early guns were only made in 12-gauge as a point of trivia, with 20-gauge models only introduced in 1948 and 28/.410 in 1959. If looking at buying or selling a Superposed, be sure you are extremely sure what model it is, consult Browning as to specifics, and get with a knowledgeable appraiser when possible. 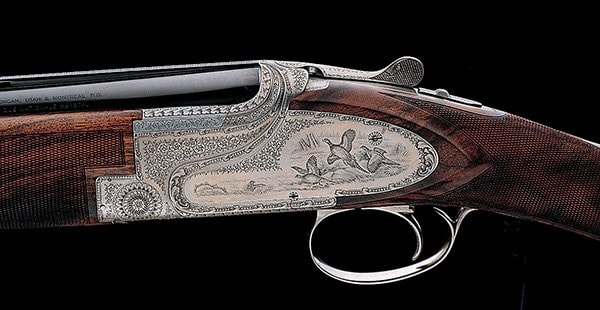 The M2 engraving pattern was designed by Master Engraver Louis Vranken in 1978 and is typical of patterns found on custom shop superposed guns.

The Browning International Custom Shop in Liege, Belgium still makes the Superposed (often referred to as the BX-25 these days) for a price. Like an $80,000 price. These guns are all works of art that happen to fire shotgun shells, which makes them functional as well as beautiful. If you scroll through the gallery of engraving on the website, you can see what you are paying for. The waiting list runs as long as two years, but they still produce as many as 250 new Superposed per annum.

And they are all one of a kind. 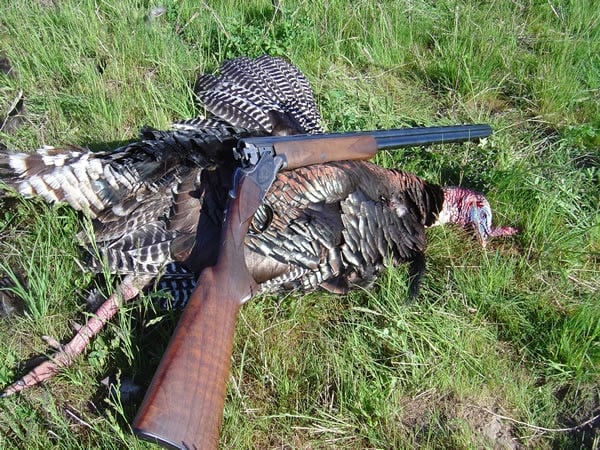 The Superposed, in any iteration, has always made one heck of a bird gun…

Citoris, as always, are more affordable but only just. While it’s possible to pick up well-used models for under $1200, this is typically about as low as they go. Argueably these guns are offered in calibers, options, and styles that the Superposed could only have dreamed of. For instance, Briley and Invector chokes, chrome large cone bores, and other features are often standard on these guns and they are safe to shoot with steel shot—something you would never do with a Belgian Superposed.