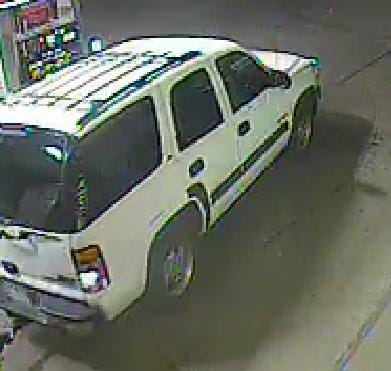 Arvada Police are looking for any information identifying a vehicle, described as a white 2000-2006 Chevy Tahoe. (Photo credit: Arvada Police)

Thieves stole nearly $100,000 in ammo and accessories from a gun shop during a night heist Feb. 20 in Arvada, Colorado, and are still on the loose.

Security cameras caught three unknown suspects hit the store around 9:30 from the outside by breaking into a secure parking and driving away with a trailer full of the store’s inventory, according to the Arvada Police Department.

“The wheels were locked, they cut the gates, the lock on the tongue, everything,” said Matthew Judd, manager of OD Green Supply,  the targeted business in suburban Arvada, to Guns.com.

The gun shop, located about 16 miles south of Boulder, had loaded approximately $100,000 worth of ammo and accessories on a trailer in preparation for an upcoming off site gun show. Although secured inside a gated storage area on a locked trailer, crooks apparently had no problems rolling away with a moving payday.

Contrary to some news reports that stated the entire contents of the trailer was in ammunition, Judd clarified that the loss was made up of about $60,000 worth of ammo with the balance in portable carts, accessories and other items.

Judd advised that, while he could not elaborate on the specifics of the ammunition involved due to the nature of the ongoing investigation, it “ran the gamut from .25ACP to .500S&W.” 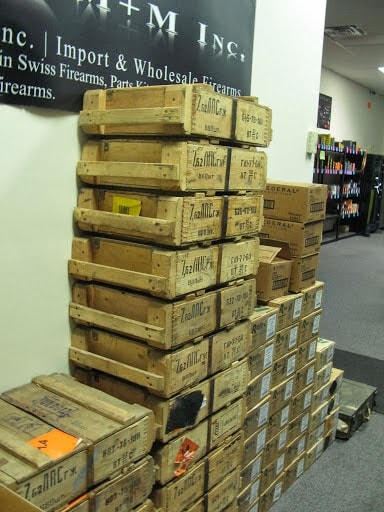 The store and authorities are holding off on releasing details of what was stolen pending investigation. (Photo credit: OD Green Supply)

Once away from the store, the thieves transferred the loot to another trailer and abandoned the one stolen.

Theft of ammunition is nothing new to contend with for both gun owners and and businesses.

Last October three teens were under investigation following theft of some 3,500 rounds of ammunition from a Federal Air Marshal trailer inside a secure parking area near Baltimore.

Just four days after the theft from OD Green Supply, a Chevrolet Trailblazer was found abandoned by the Border Patrol with 36,000 rounds of 7.62x39mm ammunition in the bed. The ammunition was seized after agents received a tip about suspicious activity in the Rio Grande City area. During the search, agents saw eight people swimming across the river to Mexico. This was more than the 30,366 rounds seized in all of  FY2013 nationwide at the border by CBP.

Hopefully there will be a break in the OD Green case in coming days.

“We had three different camera angles and got a lot of pictures of two men and a woman. Then they went to the Shell Station a mile down the road and stayed there an hour and a half on surveillance cameras,” said Judd.

Authorities believe the ammo will soon hit the black market, if it hasn’t already.

The Arvada Police has the footage from both the gas station and OD Green. According to a news release, the vehicle used in the theft is described as a 2000 to 2006 Chevy Tahoe, white with distinct black markings.