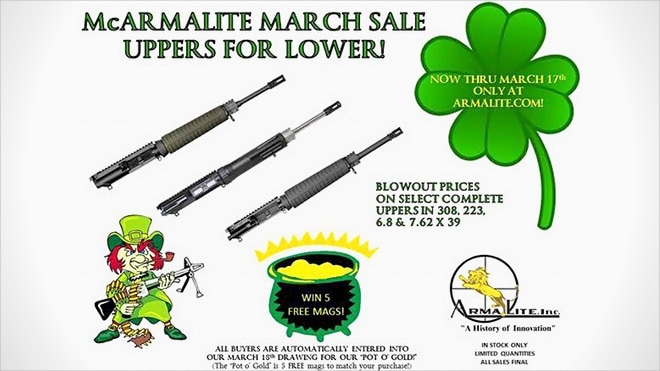 ArmaLite is celebrating St. Patrick’s Day with a blowout sale on a dozen uppers in a wide variety of chamberings for AR-10 and AR-15 rifles. Select uppers are on sale for $150 to over $250 off their regular prices. The sale ends midnight on St. Paddy’s day.

As a bonus, everyone who buys an ArmaLite upper during the sale will be entered to win the “Pot o’ Gold,” five free magazines for the upper they just purchased. This drawing is for everyone who buys an upper and isn’t limited to just those who purchase an upper from the “McArmaLite” sale.

We know that more than a few people have lowers awaiting uppers following the wave of AR-10 and AR-15 sales that shook the entire gun market last year as people rushed to buy receivers in the face of calls for increased gun control.

With prices as low as these there’s no reason to have a lower collecting dust.

ArmaLite is offering four AR-10 uppers in rifle and carbine lengths. They’ve got two AR-10 A4-pattern uppers that draw deeply from the M16 well with military-style handguards and flash hiders, but with railed gas blocks. These are available with 16- or 20-inch barrels with green and black furniture, respectively.

Chambered for .308 Winchester/7.62 NATO these uppers are built on 7175-T74 aluminum that exceed mil-spec. They have standard .750-inch gas blocks and are threaded for 5/8-24 muzzle devices. Both the carbine-length and rifle-length uppers are priced at $585.

The other two AR-10 uppers are their T-model uppers also in carbine and rifle lengths. These uppers, also chambered for .308 Winchester/7.62 NATO, feature heavy-profile stainless steel barrels and free-floating handguards. They share the superior construction and railed gas blocks as the A4 uppers but promise a little better accuracy out of the box.

The AR-10(T) uppers cost a little more at $725 and $750 for the carbine- and rifle-length models but come with a 25 percent discount with a savings of $253 over their regular prices.

ArmaLite has two M4-profile uppers with carbine-length barrels priced at $425. One has a standard 16-inch barrel and the other has an M4-length 14.5-inch barrel. The short barrel model does not come with a pinned and welded flash hider, so unless the user has a muzzle device permanently attached it must be used with an NFA-regulated short-barreled rifle or unregulated pistol lower receiver. The 16-inch model does not have these restrictions.

They’re offering four M-15 A4 uppers chambered for .223 Remington/5.56 NATO, which like the AR-10 uppers, come with military-style handguards and railed gas blocks. These come in carbine-length and rifle-length versions, in green and black. The carbine-length uppers have mid-length gas systems.

These last two uppers are priced at $475.

If you’re looking to complete that lower or build a new rifle on a budget, you owe it to yourself to check out this sale. ArmaLite has a limited number of uppers at these prices and once they’re gone, they’re gone.