Connecticut Carry dares state lawmakers: 'Either enforce the law or repeal the ban' 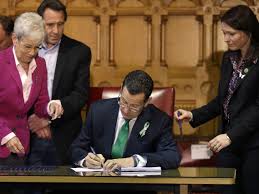 In a boldly-worded press release, the nonprofit gun-rights organization Connecticut Carry is calling on state officials to either enforce the recently passed expanded ban on so-called ‘assault weapons’ or else repeal the law altogether.

The ultimatum was issued because the leadership of Connecticut Carry believes that lawmakers do not have the temerity to instruct law enforcement to go door-to-door to ensure that every gun owner is in compliance with the ban, which required all citizens to register their rifle defined as “assault weapons” with state police by Jan. 1, 2014.

“From Gov. Malloy, to Undersecretary Lawlor to DESPP, Commissioner Schriro, and Lt. Cooke of the firearms unit, and including Lt. Paul Vance, the state needs to shit, or get off the pot,” said the group’s director, Ed Peruta.

“The fact is, the state does not have the balls to enforce these laws,” he continued. “The laws would not survive the public outcry and resistance that would occur.”

Under the law, those who failed to register their newly banned firearms and magazines (those holding more than 10 rounds) by the deadline will now have to either sell them out of state, render them inoperable or turn them over to the government.

While many folks complied with the law and registered their firearms and magazines — estimates indicate that more than 50,000 firearms and 40,000 magazines were registered by the end of 2013 — many others did not.

In fact, The Hartford Courant contends that as many as 350,000 so-called ‘assault weapons’ were not registered, which means that the state, “has very likely created tens of thousands of newly minted criminals.”

Yet, from the eyes of Gov. Dannel P. Malloy’s administration, that will change once people realize they’re illegal and they can’t keep them, then “they’re going to get rid of them,” said Michael P. Lawlor, the governor’s undersecretary for criminal justice policy and planning.

Connecticut Carry, however, disagrees with the notion that people are simply going to give up their lawfully obtained property because its now considered contraband. Once again, the reason is because there’s no credible enforcement mechanism in place. The law has no teeth.

“The anti-gun legislators and officials are scared to implement their tyranny because they know that they did not have any sort of ‘consent of the governed,’” states the press release.

“Now, State officials look down the barrel of the laws that they created, and it is very probably that they now tremble as they rethink the extremity of their folly,” it goes on.

“Connecticut Carry calls on every State official, every Senator, and every Representative, to make the singular decision: Either enforce the laws as they are written and let us fight it out in court, or else repeal the 2013 Gun Ban in its entirety.”

To learn more about Connecticut Carry’s stance on this new law, Guns.com reached out to the author of the press release and the president of the organization Rich Burgess. Below is our brief Q&A:

S.H. Blannelberry: If someone hasn’t registered their so-called ‘assault weapon’ with the state by the deadline, what is your advice to him/her?

Rich Burgess: While we don’t give legal advice, we do try to educate people about their rights and about the laws. As such, we would inform people of their lawful options, such as moving the firearm out of the state, selling it to an FFL or altering the firearm to meet the letter of the law. At the same time, we would also try to educate those people who wish to disobey the law about their rights and what to do if the state tries to come after them. We have publications about topics like this, and we have information on our website about it.

We also discussed, in depth, the decision about whether to comply or not to comply by discussing the consequences for either action in our December newsletter.

S.H. Blannelberry: It doesn’t appear that state officials or law enforcement has the chutzpa to enforce the ban, which now calls for confiscation, destruction or sale (out of state) of so-called ‘assault weapons’ — however, what happens if that changes?

Rich Burgess: We don’t expect it to change. The state works by ‘boiling the frog’ and making small, incremental moves so as not to get people too angry too fast. It would not serve the purposes of the state for people to see all the grandparents, veterans and hard working people being rounded up in huge swaths.

Many people don’t realize that the State of Connecticut has been confiscating firearms, in ways that we feel are both despicable and unlawful, for over a decade now. We have caught them both confiscating firearms and sending letters threatening arrest for failure to surrender firearms several times without the legal authority to do so. That means that the State of Connecticut is quite the expert in ‘boiling the frog’ with unlawful confiscations and actions against gun owners without going to the extreme of APCs rolling down the streets and kicking in grandpa’s door.

If they decide to roll out the APCs and go door to door, we win the public opinion. They cannot risk that.

Hypothetically speaking, how would your organization deal with state police going door-to-door to round up firearms they deem to be illegal’?

The best defense is a strong offense. That is why since our founding in 2011, we have been educating people on how to defend themselves legally against the State. Making sure people understand the intricacies of the laws in Connecticut is a first step towards making sure that people survive (and win) court cases.

In conjunction with our substantial education efforts, we have worked closely with prominent firearms Attorneys in this state like Attorney Rachel Baird of Torrington, Connecticut. It is not uncommon with the cases she sees where the media and the State have ruthlessly attacked people’s character in public, and that client wants assistance in getting the truth out there. We are very good at that.

S.H. Blannelberry: Looking at the long term, what happens if you guys lose the fight in court? Does that mean Connecticut gun owners would have to surrender their modern sporting rifles?

Rich Burgess: The only good way to fight bad laws is by challenging their enforcement. We don’t buy in to large facial challenges that take decades, cost millions and (especially in our District) go nowhere. We are on the street level, working one on one with the residents of Connecticut.

Connecticut residents that chose to comply with the arbitrary edicts of the windbags in the Connecticut Legislature have registered their modern sporting rifles and they should be fine until the state takes the next step and uses registries for what registries are good for: Confiscation. We don’t see that happening for quite a while. Remember, we have elections coming up.

The ones that did not comply will now have to live with the threat of arrest hanging over their heads. Our hope is that everyone in Connecticut, and in the great states that have been showing their very generous support so far, will keep coming together to help us build an organization with a legal defense fund that will continue to push back one case at a time.

S.H. Blannelberry: What can people in Connecticut and other states do to help Connecticut Carry defend the residents of Connecticut?

Rich Burgess: People in Connecticut and abroad can help us by donating on our website, or buying the great merchandise we sell. All of these proceeds go towards our continued efforts here in Connecticut. We are a very transparent 501(c)(4) non profit that spends all of our money on the advocacy, educational programs and defense of our members. People can also register on our site as a member for free and they will receive all of our updates, newsletters, announcement and press releases. We put out a lot of content and information and people would be amazed at all the things happening here in Connecticut.