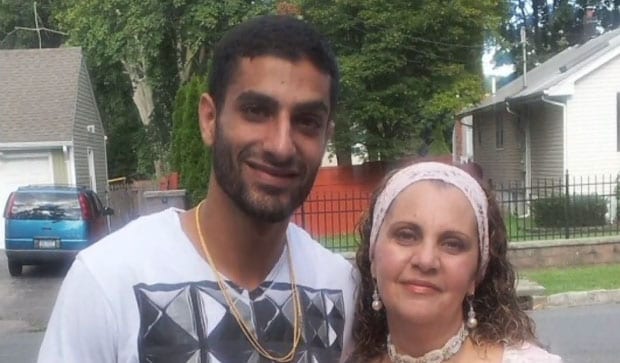 In 2011, Abdel-Gaward pleaded guilty to unlawfully fleeing a police officer, for which he was sentenced to 60 days in jail. He’s now studying criminal justice and has hopes for becoming a NYC police officer. (Photo credit: News 12 Long Island)

A man living in Huntington Station, New York, appeared in court Monday to face manslaughter charges stemming from an attempted burglary back in August in which he opened fire on an armed intruder breaking into his home.

Authorities say that five men worked together in an effort to break into Youssef Abdel-Gawad’s home, which he shares with his brother and parents. Four of the men hid outside behind a metal shed while one man, armed with a gun, went to the back sliding glass door to get inside.

The break-in was caught on the family’s video surveillance system, which was shared with local media.

The suspect can clearly be seen slipping in through the back door while holding a gun pointed towards the inside of the home. A flash can even be seen coming from the suspect’s gun, which was assumed to be a shot being fired.

Moments after gaining entry, the suspect runs out of the door with Abdel-Gawad close behind him, wielding a rifle. He fired two shots at the suspects as they all ran off, striking 33-year-old Jazzmen Bryant once. Bryant later died, and now Abdel-Gawad is facing charges for second degree manslaughter and criminally negligent homicide.

Abdel-Gaward’s attorney, Matt Tuohy, says that the shooting was justified and his client acted in self-defense. However, prosecutors argue otherwise, claiming that no shots were ever fired by the burglary suspect because no bullet casings, other than those from Abdel-Gaward’s rifle, were found in or near the home. A pellet gun was recovered from the scene, believed to belong to the suspect.

Abdel-Gaward’s mother, crying and obviously distraught at Monday’s hearing, told reporters that her son was only trying to protect his family and that he is a good man. His brother also shared that Abdel-Gaward is a criminal justice major with aspirations of becoming a police officer, already passing the New York City test and scoring among the top 500.

Prosecutors originally requested that Abdel-Gaward be held on a $50,000 bond, but the judge denied the request and ordered him to surrender his passport and wear an electronic tracking device instead.