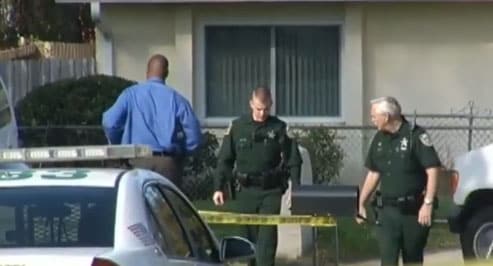 Neighbors say the homeowner is a good neighbor, and even though he converted his garage into a recording studio, he’s actually quite quiet. (Photo credit: ClickOrlando)

A group of friends turned the tables on a group of would-be robbers, fatally shooting one with his own gun after they broke into an Eatonville, Florida home, just outside Orlando, early last Saturday morning.

According to local media, it was about 3 a.m. when homeowner Usaf-Ali Castle was in his garage with four friends making music for their YouTube page when 21-year-old Clifford Johnson broke in through a side window. He demanded money from the group while pointing a pistol at them and opening the door to let at least two more accomplices inside.

However, Castle and his friends didn’t take to the demand lightly and weren’t about to become victims of a robbery or even worse.

Joseph Robinson, whom Castle describes as his “big friend,” rushed Johnson and the former football player tackled the suspect to the ground. As the two wrestled, Johnson dropped his gun. Castle then seized the golden opportunity – and Johnson’s gun.

Once the two separated momentarily, Castle fired what he remembered to be four or five shots, striking Johnson.

Amid the unexpected commotion, Johnson’s accomplices took off.

Johnson, who had a rap sheet starting from the time he was just 14 years old, was pronounced dead when police arrived a short time later.

No charges have been filed and at this point authorities believe that Castle acted in self-defense.

The group says there was no doubt that Johnson was there to cause harm.

“He had gloves. He had a gun. He came here, I kind of figured he was really, came here to hurt somebody or harm somebody. So I don’t know what made me do it, but I rushed him,” recalled Robinson, who is also known as “Big Money Kash.”

“I feel pretty good today,” Castle added the day after the incident. “I feel blessed. I feel like God [is] with me.”

Castle said he’s lived in the neighborhood for about 20 years and has never experienced anything like this before. But faced with the same circumstances, he would have reacted no differently.

“I’d do it again too, if somebody comes in my house again. I don’t bother nobody, I just wanna stay at my house, make music and play my video games,” he told reporters, adding that he would always protect himself and his family.

But Castle’s neighbor, Naomi Atanacio, says this isn’t the first time a break-in has occurred on their street. In fact, the home she shares with her mother was broke into last year and she said she’s heard of other burglaries in the area as well.

“It’s getting a little out of control, and I honestly think Orange County needs to step it up,” she said.

The group admitted that the incident was life-changing and it will probably end up in one of their songs.