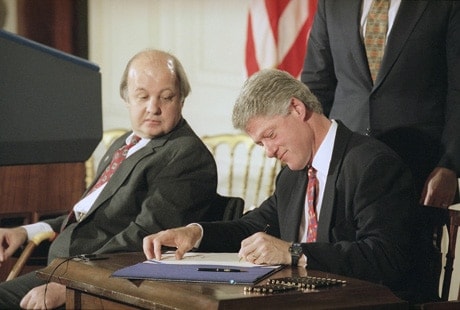 Last Friday marked the 20th anniversary of the Brady Handgun Violence Prevention Act going into effect, which initiated federal background checks on firearm purchases, and The Brady Campaign to Prevent Gun Violence celebrated the occasion by releasing a report detailing what it deems as the law’s success in reducing gun violence.

But although the report flaunts seemingly impressive numbers and statistics, not everyone is convinced that the report is all it’s cracked up to be.

The report claims to have blocked a whopping 2.1 million firearm purchases from dangerous people in the last 20 years, or about 343 purchases every single day. More than 1 million of those came from convicted felons, who by federal law are prohibited from possessing firearms, while an additional 291,000 stemmed from domestic abusers attempting to obtain guns and over 100,000 fugitives were blocked from purchasing firearms as well.

“It is clear Brady background checks work. Lives have been saved by the Brady law as we have seen the undeniable evidence showing gun homicides have decreased since the law took effect 20 years ago,” said Dan Gross, President of the Brady Campaign to Prevent Gun Violence.

However, Gross calls on the country to “finish the job” and take the Brady law one step further and mandate background checks on the remaining estimated 40 percent of gun purchases currently made without one.

“We need Congress to expand Brady background checks to make it harder for criminals and other dangerous people to get guns online, in classified advertisements or at gun shows,” Gross added, just days before Facebook, after being pushed by Moms Demand Action and Mayors Against Illegal Guns, announced that it would no longer allow the social network to be a hub for unregulated sales not requiring background checks.

The report shows a plummet in gun-related deaths, but doesn’t take into account the rise in the number concealed carry permits and gun sales by law-abiding citizens. (Photo credit: The Brady Campaign to Prevent Gun Violence)

“This report reflects the challenges we faced in passing the Brady Handgun Violence Prevention Act 20 years ago and the results prove our efforts were worth it,” said Sarah Brady, whose husband, Jim, was the namesake for the Brady law after he was shot during an attempted assassination of former President Ronald Reagan.

“Jim and I are optimistic about the future,” she added. “It took six years and seven votes to pass the Brady bill, but we stayed the course until we passed the legislation. We are not going away and we’ll continue the fight until we finish the job and get expand background checks to all gun sales.”

California Rep. Mike Thompson, who co-authored a universal background check bill currently being considered by the House, agrees that the Brady law has met its goal, but also wants to push the envelope even further.

“For 20 years, the Brady Act has helped prevent guns from falling into dangerous hands. Now it is time to finish the job by passing my bipartisan bill that makes sure people can’t bypass a background check by simply going online or to a gun show,” Thompson said. “We know background checks work. They keep guns away from criminals, terrorists, domestic abusers and the dangerously mentally ill, and they respect people’s Second Amendment Rights. … In two decades it has saved countless lives. It’s time to come together again and finish the job.”

However, not everyone is so convinced that the bill has actually saved lives or even kept guns out of the hands of “criminals, terrorists, domestic abusers and the dangerously mentally ill.”

John Lott, president of the Crime Prevention Research Center and author of “More Guns, Less Crime,” wrote a perspective piece Monday following the release of the report and while he admits that the numbers are impressive, he also asserts that they are “gross exaggerations.” Lott believes the law has actually done very little to keep guns out of the hands of those who legitimately pose a threat.

“There are actually very few hard-core criminals that are stupid enough to even try to buy a gun from a dealer that does a background check,” he writes.

Lott then goes on to explain that the more than 2 million denials didn’t necessarily stem from prohibited persons attempting to purchase firearms and that a more accurate description would be there were 2.1 million “initial denials.”

He then crunches the numbers from 2010 – the last year the information was released — in a sobering breakdown of those denials and where they actually led.

“Out of the 76,142 initial denials in the federal system only 44 individuals were prosecuted and only 13 were convicted of illegally trying to purchase a gun when they were prohibited from doing so,” Lott explained, adding, “As if that wasn’t bad enough, those convicted were hardly what one would call dangerous criminals — usually people with relatively trivial records from years earlier that didn’t realize their offense was covered.”

So with such a high rate of denials, why are there so little prosecutions and even fewer convictions? To further complicate a seemingly simple process of analyzing data, opinions once again are split over the matter.

Last June during a Judiciary Committee meeting Sen. Ted Cruz implied that the reason the convictions are so few and far between is the simple fact that they are not a priority to the ATF. An allegation which ATF Director Nominee B. Todd Jones denied, citing the lack of resources, among other reasons, for the lack of convictions.

However, Lott further explored the glitches of the current background check system. For example, sometimes initial denials are made simply because a person is flagged due to the fact they share a name similar to a prohibited person.

“We have seen this same problem more prominently with the ‘No Fly’ list. There were five times that the late Sen. Ted Kennedy was ‘initially denied’ flights because his name was on the anti-terror ‘no fly’ list,” Lott explains. “It wasn’t that the Senator was a terrorist. His name was just too similar to someone that we really did want to keep from flying. By Obama’s method of counting, that means the ‘no fly’ list stopped five flights by terrorists.”

In addition, Lott pointed out that such anomalies can sometimes prove to be more than just a mere nuisance or create catchy headlines, but actually contribute to the violent crime problem – which the background checks assumed purpose is to prevent.

These glitches are no doubt also felt among those who legitimately need an immediate means of effective self-defense, such as those women who suddenly find themselves being stalked, harassed or otherwise intimidated by a dangerous ex-boyfriend or spouse.