Owning and operating a small business can be difficult — it’s the nature of the game — and if the people in your area are almost entirely against your product, your business will most likely fail.

But that’s not the case for John Jovino Gun Shop. For more than 100 years the store known for its iconic revolver sign has operated in lower Manhattan.

To gun owners, New York is home of the SAFE Act, a draconian set of laws that were rushed passed state lawmakers in the wake of the Sandy Hook shooting by NY Gov. Andrew Cuomo, and New York City has been home turf for the leader of the anti-gun movement (and hater of big gulps) former NYC Mayor Michael Bloomberg.

Well, we’re still wondering that ourselves. Charlie, the manager of the store, was hesitant to give a tour and share his trade secrets.

Perhaps he was on the defense because he’s a gun store manager in the toughest city for gun rights, maybe he was hesitant because the store got a bad rap for some bad things some bad people did in the past, or maybe it’s because he has reporters constantly crawling over to his store for a new headline — who knows!

Even though Charlie was a tough nut to crack, he eventually opened up. 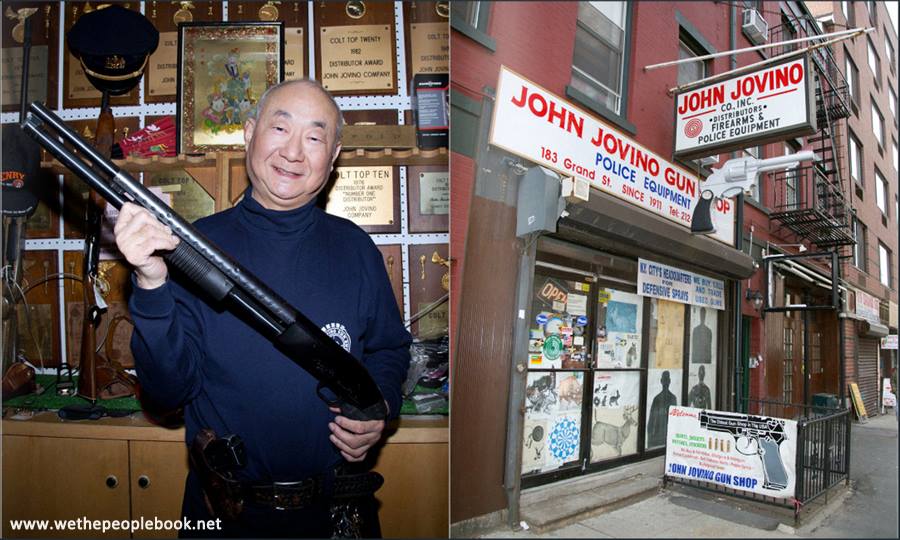 Charlie, the manager of John Jovino Gun Shop, said they sell handguns, mostly, and shotguns, but no AR15s. (Photo by Ben Philippi)

Charlie added that those with a license to carry can buy there, too — it’s just a lot less frequent. And if you search “John Jovino” you’ll see that it has the reputation of turning people away unless you have a badge.

But there’s a lot more to the story even if Charlie didn’t say it.

The store opened in 1911 by John Jovino (of course) and later sold in 1920 to the Imperato family, who also own Henry Repeating Arms — bustling company.

The store on its own with sales mostly to law enforcement and some licensed gun owners reportedly does $1 million in sales annually, more than enough to keep the tiny shop in Little Italy alive.

While we didn’t get all the answers, it was an interesting experience. John Jovino Gun Shop will remain a mystery for many, both casual New Yorkers and gun owners wondering how in the heck a gun store stays open in New York City?