The Marine who dove on a grenade while serving a tour in Afghanistan in 2010 is set to receive the Congressional Medal of Honor later this year.

Medically retired Marine Lance Cpl. William Kyle Carpenter, 24, jumped on a grenade during a rooftop battle against Taliban in Afghanistan in November 2010. His actions saved the life of his friend and fellow Marine Lance Cpl. Nicholas Eufrazio, but nearly cost him his own, Stars and Stripes reports. 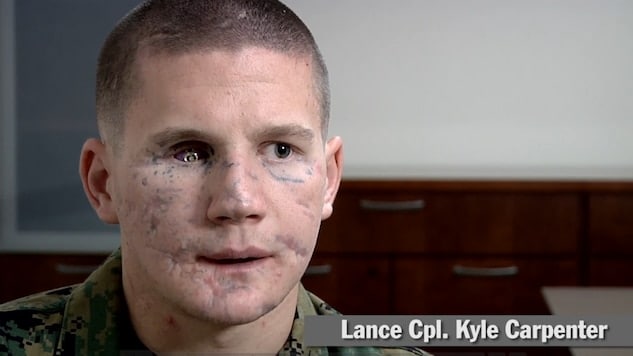 Carpenter lost one of his eyes and suffered other serious injuries after jumping on a grenade during a rooftop battle against Taliban in Afghanistan.

Carpenter suffered severe injuries from the blast, including losing his eye and most of his teeth, a shattered jaw, a broken and tattered arm, and countless lacerations from shrapnel. A piece of shrapnel damaged Eufrazio’s frontal lobe and left him unable to speak for two years.

But both men have made significant leaps in their recovery, and 30 surgeries later, Carpenter ran the Marine Corps Marathon with a posted time of 4:28:42. He consistently goes to the gym and can now do more pull-ups than he ever has been able to before.

Check out this moto video of Carpenter hitting the gym and head over to his Facebook page, “Operation Kyle,” to learn more.