Moms Demand Action delivers no guns petition to Staples HQ, but asked to leave by security 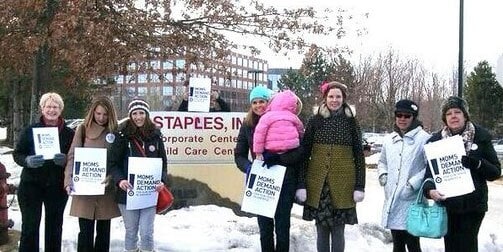 Moms braved the cold winter weather to deliver their petition, but weren’t able to make it past security. (Photo credit: Moms Demand Action for Gun Sense in America)

The gun control group Moms Demand Action for Gun Sense in America has apparently moved on from Starbucks to target Staples now, pushing the office supply chain to no longer allow guns to be carried in their stores, but apparently Staples is just not interested.

The group attempted to deliver a petition with more than 12,000 signatures to the Staples headquarters in Framingham, Massachusetts, Tuesday but were stopped in their tracks and asked to leave the premises instead, the Northport Patch reported. Nonetheless, Moms left the petition with security, but it’s unknown where the demand went from there.

Staples has yet to respond to the most current request from Moms to ban guns from their stores.

“The presence of firearms creates an inherent and unnecessary risk for Staples shoppers,” said Ann Krantz, communications lead for Moms Demand Action Massachusetts, citing an incident from last August when a woman accidentally discharged her gun inside a North Carolina Staples facility.

“It is sheer luck that no one other than the gun owner was injured. But what about next time? It’s time for Staples to put the safety of its customers first and keep guns out of its stores,” Krantz, added, failing to address how effective a ban on firearms would actually be for keeping gun-toting criminals out of the stores.

Krantz seems to be confident that the group will eventually reach their goal.

“Moms make the majority of purchasing decisions for their families,” she pointed out. “We intend to support businesses who take measures to keep our children and families safe.”

Perhaps the office supply giant just doesn’t want to play politics, having already spent some time under scrutinizing headlines after they refused to allow a Nebraska gun shop to participate in a small business contest last May due to the items in which the small business was associated with. However, following public outcry from gun rights advocates, Staples decided to tweak its policy and allow the gun shop to participate in the contest after all. 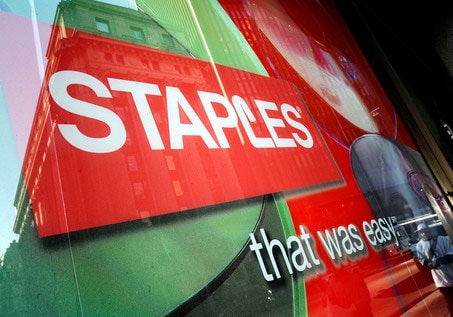 Apparently it wasn’t so easy for Moms to hand deliver their petition pushing for gun bans in Staples stores. (Photo credit: MassLive)

While Staples doesn’t necessarily have a policy on customers carrying guns per se, but rather simply abides by local laws concerning the matter, they do allow individual stores to establish their own gun-carrying policies as they deem necessary.

Nonetheless, while gun rights advocates may chuckle at the idea of Moms getting booted while trying to deliver a petition to ban guns in all of the stores, in reality the action by security guards most likely had nothing to do with the subject matter and more to do with the company’s security policies instead.