Wayne LaPierre at CPAC: 'NRA will not go quietly into the night, we will fight' (VIDEO)

LaPierre, who spoke Thursday at the American Conservative Union’s 2014 Political Action Conference (CPAC) held at the Gaylord National Resort & Convention Center in National Harbor, Maryland, gave a rather bleak assessment of the direction the country is headed in.

“Freedom has never needed our defense more than now,” exclaimed LaPierre. “Almost everywhere you look, something has gone wrong.”

“It’s why more and more Americans are buying firearms and ammunition — not to cause trouble, but because we sense that America is already IN trouble,” he went on to explain.

So, who is to blame for the malaise of America?

Well, one could argue its the usual NRA adversaries: the Obama administration, the Clintons, “political and media elites,” a weaponized IRS, and a group of “bad guys,” which includes “terrorists and home invaders and drug cartels and car-jackers and knock-out gamers and rapers, haters, campus killers, airport killers, shopping mall killers, road-rage killers,” among others.

Given these formidable foes, what shall Americans do to preserve their core values, freedoms and way of life?

Two things: First, sign a Declaration of Individual Rights. Second, join the NRA because, according to LaPierre, “It’s how you resist and tell the world that you’re going to fight and protect everything you care about.” 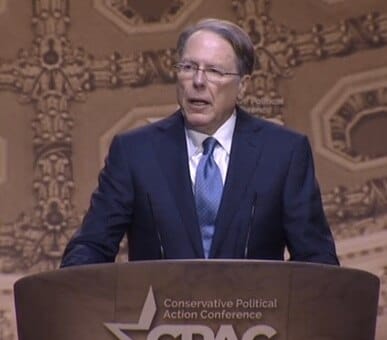 Looking ahead to 2016, with the prospects of Hillary Clinton running for president, LaPierre warned that the “election is going to be a bare-knuckled street fight,” with extremely high stakes.

“They intend to finish the job, to fulfill their commitment — their dream — of fundamentally transforming America. Into an America you won’t recognize.”

However, borrowing a refrain from the bard Dylan Thomas, LaPierre vowed that the “NRA will not go quietly into the night. We will fight.”

In short, it was a typical Wayne LaPierre speech replete with hyper-charged rhetoric, doomsday scenarios, a powerful ‘us versus them’ motif, and an ‘our-back-is-against-the wall’ type outlook.

I’ll be honest, the speech didn’t really resonate with me. I don’t think things are as bad as Republicans and conservatives say they are. By the same token, I don’t believe Democrats and liberals when they argue that everything is headed in the right direction.

That said, I support the NRA because it still continues to kick ass where it matters most, on the legislative and legal fronts. So, LaPierre can spare me the “end is nigh” speeches; they’re unnecessary because I know you’re doing a good job when Illinois is shipping out concealed carry permits for the first time ever, California is on it’s heels with it’s arbitrary ‘may-issue’ policy, and all of the federal gun control laws spawned in the wake of Sandy Hook died in the Senate.