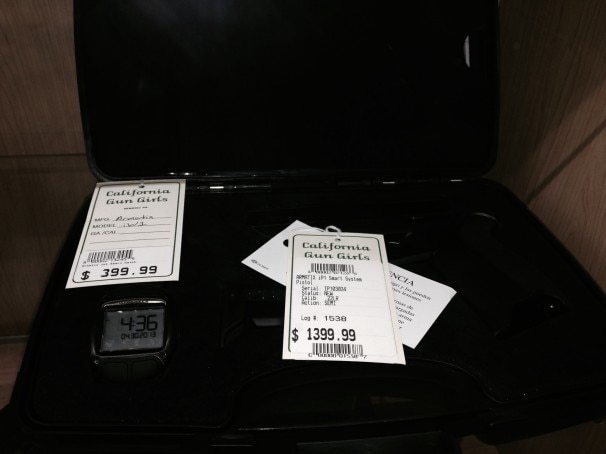 “Our facility does NOT carry the Armatix pistol, never has,” says the Oak Tree Gun Club, although pictures such as these have appeared which would tend to refute this claim. (Photo credit: Armatix via the Washington Post)

The Oak Tree Gun Club in Santa Clarita, California, which was briefly associated with the Armatix smart gun, is now rapidly backpedaling away from the fledgling technology as fast as it can.

“Our facility does NOT carry the Armatix pistol, never has,” officials with Oak Tree told one media outlet on Feb 27. This was just a week after James Mitchell, the “extremely pro-gun” owner of the Oak Tree Gun Club, boasted to the Washington Post that his firearms shop was the only outlet in the country selling the Armatix iP1.

The Aramtix iP1, made by a German firm that has tried unsuccessfully to sell European police and militaries on guns that incorporate biometrics, commonly referred  to as ‘smart gun’, that will only fire if the matched RFID technology companion wristwatch is within range of the gun itself. Without the watch, the gun will not shoot.

The iP1 was celebrated by US Sen. Ed Markey (D-MA) when he unveiled his ‘Handgun Trigger Safety Act’ on Feb. 20.

During Markey’s press conference he mentioned the Armatix pistol by name, comparing it to James Bond’s fictional “Skyfall” Walther, although the real iP1 does not have the same biometrics. 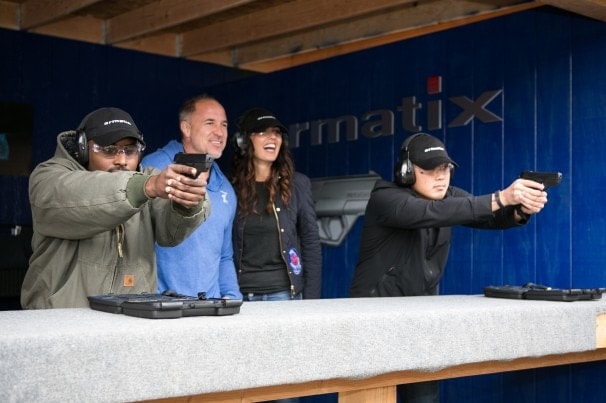 Images of California shooters having a blast at the Oak Tree Gun Club with the Armatix pistol. (Photo credit Armatix via the Washington Post)

This quickly led people to Oak Tree, who Armatix lists on its importation FFL as its premises, and an almost immediate backlash from the gun community.

Oak Tree’s Facebook page has been under a steady barrage of negative comments from those upset with the store’s apparent association with Armatix for weeks. These comments run from, “You have betrayed the shooting community on a national level. Hope you enjoy the 30 pieces of silver you got from Armatix,” to, “You have just lost me, my friends, and my family as a customer. How dare you support those who would take our rights from us?”

The National Shooting Sports Foundation conducted a national scientific poll of more than 1,200 Americans in October 2013 on smart guns.  The results found that roughly three-quarters stated they would not buy a smart gun, would not trust the reliability of one, and that the government should not mandate such technology.

Apparently no one had shown the poll to Oak Tree before the story of them and the Armatix went viral. Once it did, however, the club quickly began putting room between itself and the $1,399 German smart gun.

Going back through the ATF’s online listings of FFLs, Armatix first appeared in May 2013, using Oak Tree’s address. The German company has a Type 8 license which is for an “Importer of Firearms Other Than Destructive Devices.” Set to expire in May 2016, the mailing address lists Armatix USA’s Beverly Hills office.

On March 3, Oak Tree posted the following response to the subject of Armatix’s FFL on its Facebook page then promptly went radio silent:

The other FFL was obtained by Armatix, and it is an import FFL. The Armatix “technology” that James Mitchell was referring to is a Range System, which utilized sensors placed down-range, to establish safe shooting angles. Because Oak Tree is a large training facility, this was something that was considered. We would not import the “technology” so they obtained an import FFL for this purpose. There was never any agreement to purchase the range system.”

An examination of the products advertised on Armatix’s website by Guns.com show a host of ‘mechatronic assembly’ offerings designed to secure firearms– but no range sensors or systems.

On Thursday the Washington Post followed up on the story with the release of the extensive notes from their interview with the Oak Tree’s owner, along with posting images of the iP1 both for sale at the shop and being fired on the range.

Armatix, who paid for range space, and provided merchandise to the Oak Tree Gun Club are not denying their involvement with James Mitchell, the club’s owner.

“It’s sad, because at the end of the day, he was trying to do something good, which is provide choice for those people that want safety,” said Belinda Padilla, president of Armatix’s U.S. operation.

Oak Tree did not return several requests for comment from Guns.com on the Armatix situation. In a phone call placed to the store, an unnamed operator simply advised that the Armatix is not for sale there and never was.