Dashcam footage was recently released of the November officer-involved shooting of a man that pinned an Illinois State Trooper with a van.

Illinois State Trooper Luke Kuehl pulled over Shane Cataline for the second time after discovering he earlier placed a 911 call. While stopped on the side of Interstate 88, Kuehl and Officer Steve Francisko repeatedly told the driver to turn off the vehicle, put he sped away instead, smashing Kuehl against his own cruiser in the process, KWQC reports. 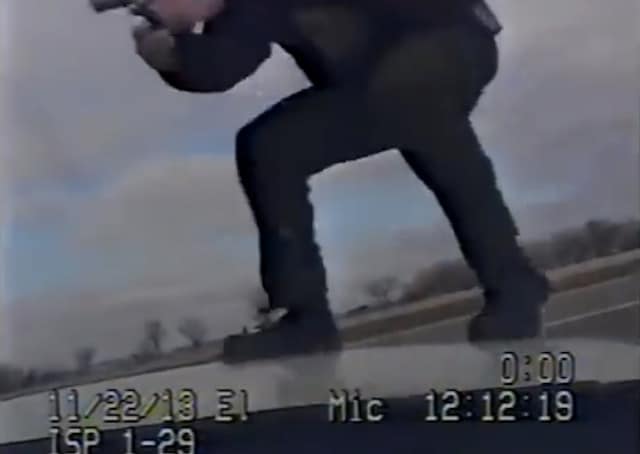 Conversation Officer Steve Francisko fires at the suspect from the roof of a patrol car.

The stop began with Kuehl conducting a welfare check on Cataline, telling him he wanted “to talk to you about that a little bit.” Cataline suddenly threw the van in reverse and sped backwards. Kuehl was flung away from the vehicle in the process.

Moments later, Cataline rammed Kuehl with his van, pinning him against his own cruiser. Francisko rushed over, jumped on top of the cruiser, and opened fire on Cataline. The suspect was fatally shot and Francisko helped Kuehl limp away.

“I thought you were getting killed. I had to shoot him,” Francisko said.

“I know it, I thought I was going to die too,” Kuehl replied.