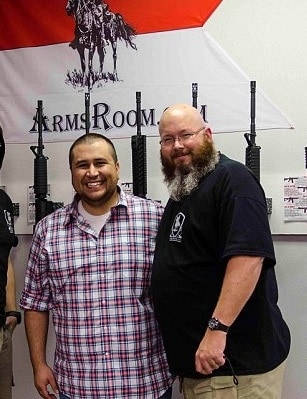 A Florida gun dealer was forced to switch the site of a scheduled gun show in Orlando after the venue manager learned that George Zimmerman would be attending.

The Arms Room in Orlando last weekend relocated the New Orlando Gun Show from its planned site at the Majestic Event Center, to its own showroom after the venue canceled the booking over Zimmerman’s planned attendance at the show.

“We were their first trade show, but when it came out that George was going to be making an appearance, they canceled,” Mike Piwowarski, owner of the Arms Room and the show’s organizer told Guns.com.

Zimmerman was to be a paying vendor at the show and was giving out free autographs and posing for photographs in a ‘meet and greet’ type of environment.

The controversial figure’s intent, according to Piwowarski, was to be able to attend an event where he would be freer to be himself, where there would be less negativity than he has encountered in other settings.

This comes on the heels of Zimmerman’s recent visit to local gunmaker Kel-Tec, getting arrested for domestic abuse, his forays into therapeutic art and failing to organize a celebrity boxing match.

The Majestic pulled the plug on the gun show’s location after it learned of Zimmerman’s planned appearance.

Majestic’s General Manager, Vikash Mahadeowrite, told the MailOnline that, “It was very detrimental to Majestic’s image as a local business for Arms Room to post on Twitter saying that George Zimmerman would be a guest of honor without confirming that with Majestic and without getting prior approval from Majestic management.”

Piwowarski took exception to the statement from Mahadeowrite, noting that the store doesn’t even have a twitter account. 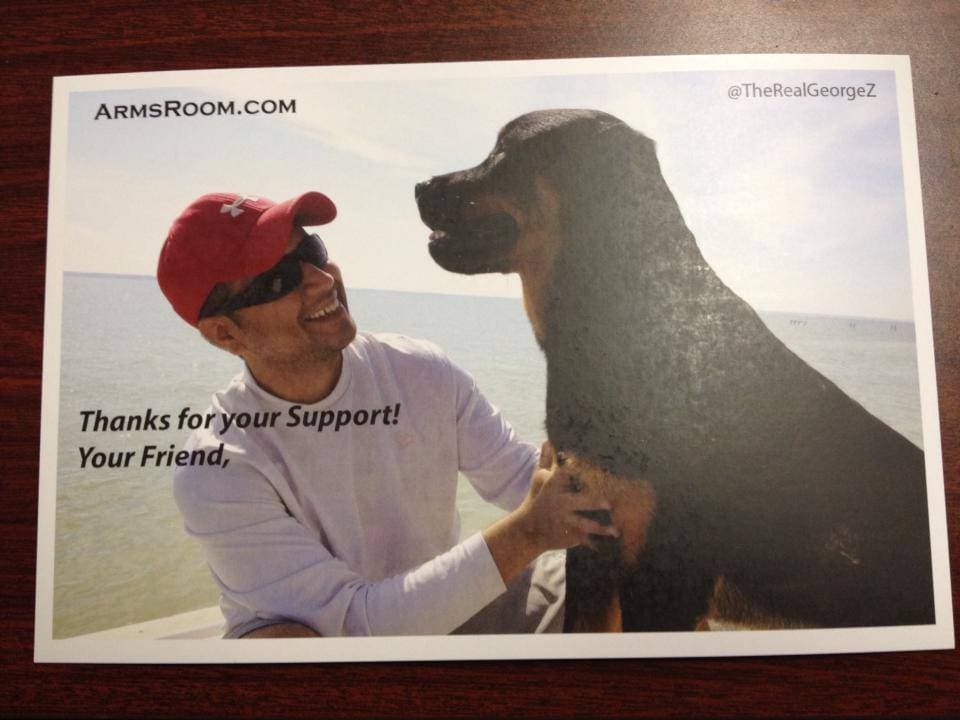 At the event, Zimmerman gave out free autographed pictures of him and his canine companion to supporters. (Photo credit: Facebook)

After the cancellation from the Majestic, the event scaled down and hurriedly moved to the Arms Room’s retail location on East Colonial Drive.

“I’m a huge gun guy, huge Second Amendment guy,” Piwowarski said, “And this really didn’t start off that way. It’s about somebody telling George he couldn’t be there. We’re not going to be told we can’t have him or have someone tell us he can’t be here.”

At the smaller show this weekend Zimmerman conducted his meet and greet where he handed out autographed pictures of him and his dog relaxing on a beachfront. Except for taking a break to go for a ride in the store’s 5-ton truck, he stayed on site with his girlfriend Samantha Scheibe.

Piwowarski told Guns.com that over 200 came for the event Saturday and another 100 on Sunday. Contrary to threats made of protests and even of the Black Panthers appearing at the event, “We had zero troublemakers show up.”

“He seemed nervous and actually a little scared to be there. He also appeared emotional, like he was really thankful and touched that people would come out to see him,” recounted one event attendee that met Zimmerman.

Piwowarski, citing the last minute change in venue caused by the Majestic, plans to sue the center for $300,000 in lost gun sales.

“It was a good event,” Piwowarski told Guns.com in reference to the Majestic, “just not a good event center.”