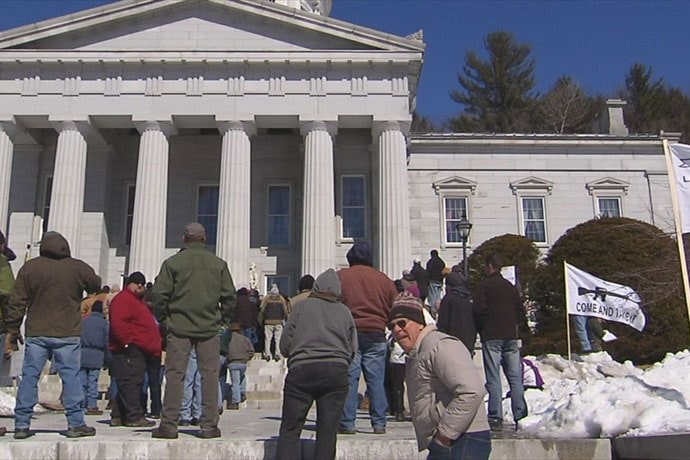 Less than a week after the proposals were approved by the city council, protesters took to the Statehouse steps to show their disapproval. (Photo credit: My Champlain Valley)

Over 800 gun rights advocates braved the bitter cold on Sunday to gather on the Vermont Statehouse steps to protest proposed gun control legislation that would affect the city of Burlington, local media reported.

Nonetheless, not all of the residents are thrilled that the proposals have even gone this far.

“Burlington City Council just proved that it doesn’t matter if it’s our Constitutional right, they’re going to find a way to go around it,” said Amy Alexander, who was present at the weekend rally in support of Second Amendment rights.

Those who oppose the legislation – which would allow authorities to confiscate firearms from those accused of domestic violence, require safe storage and ban guns from establishments which sell alcohol – say that it simply opens the door for similar, if not more restrictive, legislation in other cities across the state, citing H.735, a proposed state law currently in committee that would require a fee to store unlawful weapons.

“Our rights are the same for every resident in this state, be it Burlington, Barre, Brighton, Brattleboro, Barton. It does not matter,” said Scott Chapman of VT2A. “We are all the same.”

Another speaker at the rally said that lawmakers are using firearms as the base for artificial problems.

“Is there some epidemic that I haven’t heard about? About reputable citizens flipping over tables and starting a shootout in the local creperie?” said Paul Dame. “If this is your concern, I have to tell you, ‘Become a writer, not a legislator, because you have a wonderful imagination.’”

However, those who support the legislation claim that tougher gun laws is what the people of Vermont want.

“On Tuesday in just one city, over 5,000 came out and voted overwhelmingly to support the Burlington charter changes,” said Marie Adams, GunSense VT. “All of those three measures are proven to save lives, and so for most people, they feel these are common sense measures,” Adams added.

Although the proposals have received the necessary votes in Burlington, some say that it won’t be so easy in other cities.

“Every town is not as protective as Burlington is,” said gun rights advocate John Burdic. “We have rights as citizens to be able to defend ourselves from people that are coming into our houses, and trying to invade, whatever it may be.”