An Australian clerk called an “armed robber’s” bluff last Tuesday when he flat out refused to give him any money.

Steve Ewart, a 46-year-old shopkeeper in Bendigo has been around firearms his entire life. So when a masked robber came in and thrust a gun in his face, he instantly knew it was fake. The robber demanded money, but Ewart just said “no,” Daily Mail reports. 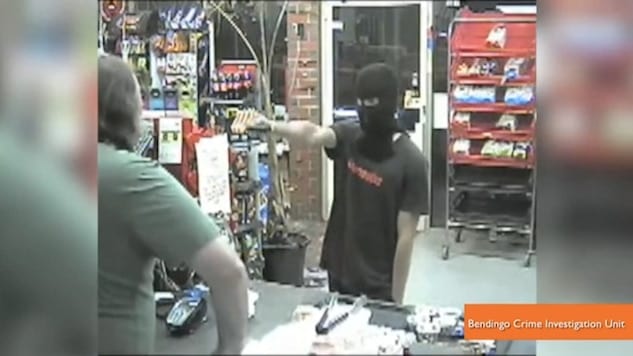 Ewart said he instantly knew the gun was a fake and refused to give the robber any money.

Flustered and confused, the robber tucks the cap gun back into his waistband and walks out the door. Though Ewart was confident in his actions and knew the gun was a fake, he doesn’t recommend others to do the same.

“I only did what I did because I knew what I was looking at,” Ewart said. “[I was] just lucky. I say to staff that they should just hand over the cash if anyone comes in with a real gun. It’s not worth risking your life for.”

The suspect fled on foot and police have yet to apprehend him, though they do “have some leads,” according to Ewart.