The FBI caught up with a Brooklyn native who robbed a Michigan bank at gunpoint last week after he posted an incriminating gun-selfie to Facebook.

Jules Bahler, 21, robbed three Michigan banks in an eight-day period starting Feb. 26. He passed notes to the teller demanding money during the first two robberies and brandished a “black sub machine gun and demanded money” at the third. Bank surveillance cameras captured Bahler’s face, and when he posted a selfie to Facebook, the FBI quickly descended on him, The Smoking Gun reports.

On Feb. 26 Bahler robbed a credit union of $4,300 and on March 4 he robbed a Bank of America branch of $4,000. On March 5 he robbed a Chemical Bank branch in Bay City at gunpoint of nearly $7,000. On the same day he touted his money on his Facebook page, where he goes by the moniker “King Romeo.” 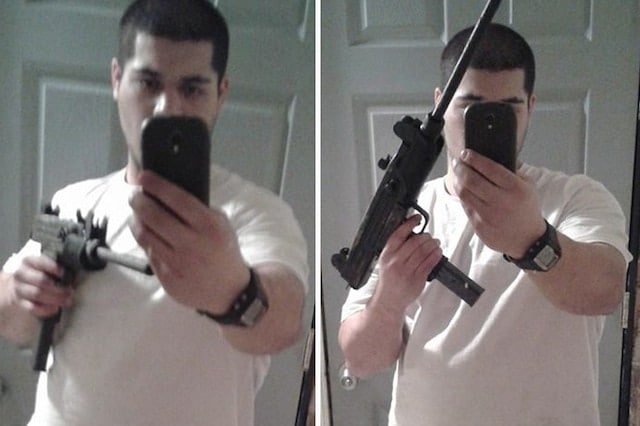 Bahler posted photos to Facebook of him brandishing the same gun he used during the bank robbery. The FBI quickly made the connection.

“Bought my first house And chopper today … lifes great [sic],” he wrote for the caption of the photo.

A friend who goes by “King Machete” offered “King Romeo” some unsolicited advice, saying on his Facebook page, “U tripping brotha. I wouldn’t show that shit off like that cops be watching this shit brotha.”

But the FBI had already made the connection. Federal agents and local sheriff’s deputies started staking out Bahler’s Pontiac residence on March 7. Authorities stopped him as he drove away from his house and discovered the submachine gun in a duffle bag in his car.

Bahler was arrested and charged with two felony counts of bank robbery and carrying a firearm during the commission of a violent crime. He later confessed to all three robberies.

As it turned out, Bahler wasn’t much of a baller.