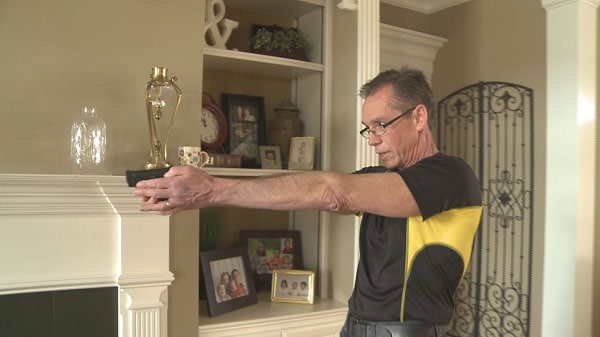 When Kenny Guffey got his carry permit about a year ago, he never thought he would actually need to use his gun. (Photo credit: Local 8 Now)

An armed man was able to defend his elderly mother against a violent intruder who broke into her Seymour, Tennessee, home Wednesday evening in an apparent attempted robbery.

According to local media, Kenny Guffey was on his way home from work at about 6:30 p.m. when he decided to give his mother, Christine, a call.

Colin Patrick Lynch, 29, had broken into the woman’s home, but was unaware that the man on the phone with his would-be victim was only two minutes away – and armed with a handgun.

Kenny just started carrying a gun about a year ago when his entire family received their carry permits, but – like most who carry a gun – he never expected the day would come that he would actually need to use it.

When Kenny entered his mother’s home, gun drawn, he saw Lynch standing over the 83-year-old woman with a shovel in his hand.

Kenny said Lynch then turned his attention on him, using the shovel to knock the gun out of his hand, but the woman’s son wasn’t ready to give up without a fight.

A scuffle broke out and Kenny tackled Lynch to the ground, regaining control of his gun, which he then held to the back of the intruder’s head while his mother called 911. It was at that point that Kenny finally saw the knife.

Police arrived a short time later and apprehended Lynch, who now faces one charge for aggravated burglary and two charges of aggravated assault.

Christine suffered from a heart attack following the incident and was taken to the hospital where she is said to be recovering and doing okay.

The woman’s son only suffered minor cuts and bruises, but is thankful that things worked out the way they did.

“God just worked this out and put me that close to her house. Because that’s the only way we’re both alive – we could have both been hurt bad,” he said.