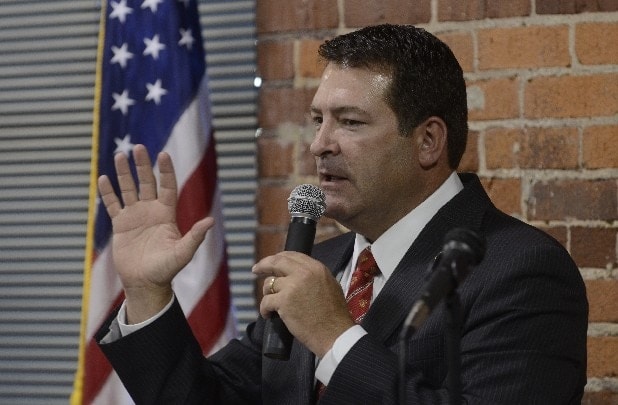 Sen. Mark Green, (R-22), is proud that his bill to allow guns in parking lots passed, saying, “The only thing that can stop a bad guy with a gun is a good guy with a gun.” (Photo credit: Times Free Press)

It is no longer against the law to have a gun in the trunk of your car in some parking lots in Tennessee.

With Gov. Bill Haslam’s (R) signing of SB1701 on March 6, the legislative fight on allowing concealed carry holders to store firearms in the trunks of parked cars, even if it’s against the property owner’s wishes, is over for this session.

“What this bill does is it allows guns in places where they’ve been prohibited,” said Sen. Mark Green, (R-22), the bill’s sponsor. Green, a physician known for his treatment of Saddam Hussein while in the military, further explained that, “The only thing that can stop a bad guy with a gun is a good guy with a gun.”

Green’s bill, SB1701 , changes the term “motor vehicle” under Tennessee’s parking lot law to include all vehicles lawfully possessed by the permit holder with the exception of government or business-owned vehicles, thereby making an exception for permit holders.

SB1701 passed unanimously in the state Senate and by a wide margin (83-6) in the state House last month, while an attempt to expand the bill at the last minute was shot down.

“We have heard from several employers who note that the outcome of this legislation may well impact their decision either to locate new facilities in this state or expand existing operations,” Tennessee Chamber of Commerce and Industry President Bill Ozier had warned the state senate before SB1701 was passed. “It’s certainly more of a concern than you might otherwise think.”

In the past, companies such as FedEx have come out against the state’s guns in parking lots legislation.  Nevertheless, this has not stopped gun industry giants such as Beretta from expanding to the Volunteer State.

“Under this new law, carry permit holders can keep a firearm in their own vehicle, or in any vehicle that they legally posses, including one loaned by a friend or relative or a rental car,” Catherine Mortensen, NRA Spokesperson told Guns.com Tuesday.

“Law-abiding people rightfully should be able to defend themselves whenever the need arises.  The NRA would like to thank the men and women of the Tennessee legislature for supporting this common-sense bill and Gov. Haslam for signing it into law.”

This brings the number of states that have so-called “Bring Your Gun to Work” laws that limit how employers can regulate firearms on their property if said gun is locked inside a vehicle to 23.