15 states have stricter gun control since Newtown, even more have loosened restrictions 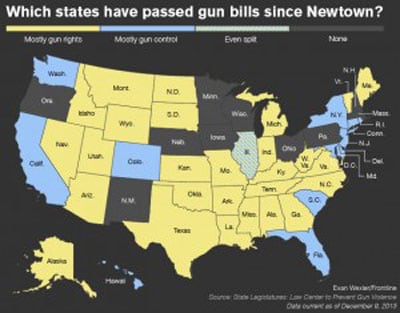 In the 15 months following the tragedy at Newtown, gun control has been a hot topic in all 50 states, and while gun control experts at John Hopkins highlight the 15 states which have enacted greater gun control measures during that time, the stark reality is that there has been far more legislation passed which actually loosened restrictions.

The focus from both sides of the fence has been on creating a safer environment in our country, primarily for our children, which accounted for the majority of the victims at Newtown. However, while guns have remained a key player, mental health – at least to some extent – has finally made its way into the conversation as well.

According to the “Updated Evidence and Policy Developments on Reducing Gun Violence in America,” published by John Hopkins, the 15 states and the District of Columbia, which accounts for about 44 percent of the population, created more stringent gun regulations in the past year, resulting in legislation that has expanded background checks, required additional licensing and fingerprinting, as well as made it more difficult for those with a history of violence, including domestic violence, to legally obtain a firearm.

However, while there are few who would argue that keeping firearms out of the hands of violent offenders isn’t a good thing, the report failed to address how the laws would keep dangerous weapons out of the hands of those hell bent on wreaking havoc and willing to break the law in order to do so.

Nonetheless, the researchers still point to measures which they feel would greatly reduce gun violence even more in states which have relatively loose firearm restrictions. Among the measures sought are making it illegal for someone under the age of 21 to possess a handgun, as well as serious juvenile offenders, those convicted of violent misdemeanors and multiple drug or alcohol-related convictions.

“Policies should recognize that a history of any kind of violence—particularly with court involvement—is a better predictor of future gun violence than mental health history.”

Swanson and several other authors of various chapters in the report drew up recommendations for both state and federal policies earlier this year which would have restricted the purchase and possession of firearms for five years by individuals with a history of violence, which included more than one drug or alcohol related conviction within a certain time frame.

“These recommendations are very much in line with what the vast majority of the American public — including gun owners — want in terms of keeping guns away from high-risk individuals,” said Jon Vernick, JD, MPH, co-director of the Johns Hopkins Center for Gun Policy and Research, and an editor and author of “Updated Evidence and Policy Developments on Reducing Gun Violence in America.”

Dr. Garen Wintemute, director of the UC Davis Violence Prevention Research Program and contributing author to the report, led a survey in which he found that more than 90 percent of the gun dealers he contacted in 43 states also support the notion to prohibit those with multiple cases of alcohol-related violence from possessing firearms. More than 70 percent of those questioned during the survey also support restricting gun rights to those with multiple DUI convictions.

“Unfortunately, the handful of states that have listened to their constituents and enacted laws intended to prevent high-risk individuals from accessing guns are undermined by the gaping hole in federal law which gives criminals and other high-risk groups the option of going to private sellers at gun shows, on the Internet, or elsewhere to buy guns,” said Wintemute.

“Mobilizing and increasing the political participation of gun owners who support policies like universal background checks is a critical next step,” said Daniel Webster, director of the Johns Hopkins Center for Gun Policy and Research, and an editor and author of the report. “Right now, politicians who are influenced by the gun lobby are not being responsive to the majority of their gun-owning constituents.”

In fact, in the year following the Sandy Hook shooting, more than 1,500 gun bills were introduced in states throughout the country. Of those, only 109 have actually been passed into law, and out of those, 39 have tightened gun restrictions while 70 have loosened them.