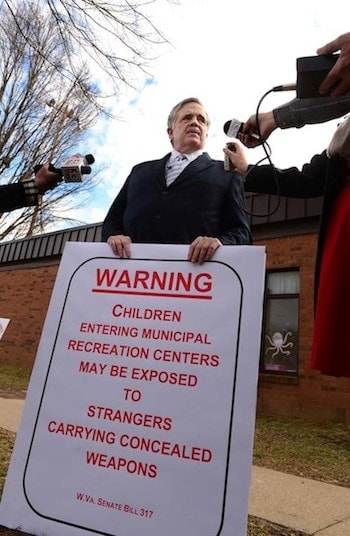 The mayor of Charleston, West Virginia, is railing against a pending pro-gun law that would allow concealed carry permit holders to bring firearms onto city property, including recreation and community centers.

At a Tuesday press conference in front of the Martin Luther King Jr. Community Center, Charleston Mayor Danny Jones argued that Senate Bill 317 goes too far in its attempt to preempt city and municipalities from regulating firearms.

“What I am trying to do is appeal to everybody in this city to help me put a stop to this foolishness,” said Jones. “This is a place for children, not for guns.”

“We’re not getting in the gun business in any of these rec centers, not at all,” he continued. “They can get [Delegate] Tim Manchin or Senator [John] Unger or somebody else down here to work the door and collect the guns.”

SB 317 cleared both chambers of the legislature with overwhelming bipartisan support, passing unanimously in the state Senate and by a 92-5 vote in the state House.

According to the NRA-ILA, the bill would expand the rights of gun owners in the following ways:

-Remove the “grandfathered” regulations in Charleston and other municipalities that allow regulations like a three-day “waiting period” on handguns and the purchase of one handgun a month (gun rationing).
-Eliminate the ability of municipalities to regulate the carrying of firearms in municipally-owned property that is rented out to private businesses such as those in Martinsburg.
-Limit those buildings a municipality may restrict and regulate the carrying of a firearm to itemized and specific locations like courthouses and city halls.
-Allow for the storage of firearms in personal vehicles on municipal property when locked and out of sight.

Jones is not alone in protesting SB 317. John Charnock, the director of the city’s park and recreation department, does not believe that firearms belong in community centers where kids are the primary patrons.

“We’re here for recreation, and the kids are in here for an after-school program, doing their homework or in the gym playing,” Charnock told the West Virginia Gazette. “As a parks and recreation department, we’re not set up, nor should we be set up, to handle guns.”

Also at issue here, according to Jones, is “social class.” Jones believes that if this were to affect affluent citizens who belong to private country clubs and gyms they’re would be a larger outcry over SB 317.

“Can you imagine if there was a rec center up there next to Holz [Elementary] or Overbrook [Elementary], or any of the schools in the more high-income neighborhoods, and all of a sudden they were ordered, ‘Well, you have to let guns in here’? Can you imagine what the uproar would be?” asked Jones.

The controversial measure now sits on the desk of Democratic Gov. Earl Ray Tomblin, who will either sign SB 317 into law or veto it, sending it back to the legislature.

Erika Soto Lamb, the communications director of Moms Demand Action for Gun Sense in America, wrote the following in an email to Guns.com:

Mayor Jones was driven to join Mayors Against Illegal Guns and fight for common sense gun laws last week as part of his opposition to HB317, an aggressive rollback of public safety laws — including a provision that would eliminate criminal background checks on private handgun sales. When Missouri did the same, the homicide rate spiked nearly 25 percent.