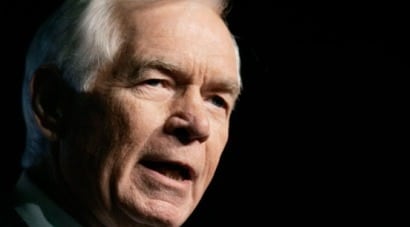 Sen. Thad Cochran (R-MS), is backing a bill that would prevent federal funds to be used for any gun registration. (Photo credit: AP)

A Republican senator is proposing legislation that would forbid the use of federal funds for any gun registry maintained by any organization, including state and local governments.

Referred to as the Gun-owner Registration Information Protection Act, or GRIP Act, the bill seeks to prohibit the federal government from giving assistance to states or local entities for the storage of personal information related to legal gun ownership. It also states that all federal agencies would have to refrain from such activities.

“The federal government should not play any role in misguided gun control initiatives that involve the storage or public distribution of personal information of law-abiding people who own or purchase firearms legally,” Sen. Thad Cochran, (R-MS), the bill’s sponsor,  said in a release.

“There is nothing in law today that says federal resources can’t be used, either intentionally or otherwise by a state or local government, to collect and store personally identifiable information related to legal firearm purchases and ownership. This legislation would close that loophole,” he said.

Cochran’s bill, currently indexed as S.2105, is structured to prevent any federal dollars to be used, even as grant money, for state and local gun registries.

The bill would prevent any of those funds for the use of building or maintaining such registries. Current federal law prevents the U.S. government from keeping information during background checks and S.2105 would both continue that standing and strengthen it with stricter language.

Getting the bill up Capitol Hill and to the President could prove difficult for Cochran. With a firm Democratic majority in the senate and the President asking for $182 million in new gun control spending for the 2015 budget to include a huge increase in background checks funding  at the state level, it is sure to draw fire.

The bill, however, does have the endorsement of a dozen other lawmakers and the National Rifle Association.

“Gun registries lead to confiscation. That’s why they are at the top of every gun control supporter’s wish list,” said Chris Cox, executive director, National Rifle Association Institute for Legislative Action. “Senator Cochran’s legislation recognizes this threat, and would block the  use of federal funds to support gun registration schemes at the state or local level.”

While there are no current statutes or pending legislation that addresses the issue of federal dollars going for state gun registration, the practice of registries themselves is the subject of growing criticism in states like Connecticut, Hawaii, and New York.

The GRIP Act, introduced Monday, has been referred to the Senate Homeland Security and Governmental Affairs committee for review.