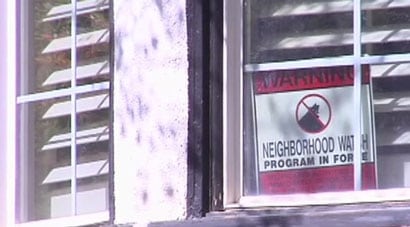 Apparently the suspects didn’t think too much about the “Neighborhood Watch” until they heard gunshots. (Photo credit: ABC)

When a Bakersfield, California, man caught his neighbor’s home being burglarized for the second time in less than an hour Tuesday morning, he took action, firing warning shots to scare off the suspects.

The move worked and neighborhood residents support his actions, but the man may now face charges for negligently discharging a firearm, a local ABC affiliate reported.

Residents say that it’s always been a nice, quiet, safe neighborhood, but recently crime has started to increase and the homes which are unoccupied during the daytime hours have become a target for burglaries.

Tuesday morning just before 9:00, one resident heard a loud crash followed immediately by his dogs barking. When the man looked outside, he saw a suspect carrying a big screen TV out of his neighbor’s house and load it up into a white Chevy pickup truck before driving away with a second suspect.

The man called the police, reported what he had witnessed, then went on about his day.

However, less than an hour later, the two suspects returned to the same home and began removing more items. Only this time they had a third person, a female, with them as their getaway driver.

Authorities had not yet responded to the first call, so the man decided to take matters into his own hands rather than stand by and watch helplessly as his neighbor’s home was being burglarized.

The man grabbed his handgun and walked to the neighbor’s home where he warned the suspect, who had an armload of the neighbor’s belongings, to stop. The suspect ignored the man’s request and continued carrying items to the truck.

Then, in attempt to let the suspect know that he meant business, the man fired warning shots into the air. At that point, the suspect dropped the items he was in the process of stealing and jumped into the truck before the three sped away.

Neighborhood residents, including the homeowner who was the burglary victim, applaud the man’s actions and say he did the right thing.

“I think that a homeowner has the right to protect their home and their property, and the way I understand it, the neighbor across the street was trying to protect his neighbor’s property,” said Janet Goff, another neighbor who has lived there for more than 40 years. “I would want them to do that for me.”

O.J. Droppers, who has been a resident in the neighborhood for 15 years, agreed. “They would have stripped the house completely of everything that was in there, but that was stopped because of what he did.”

Ray Pruitt, spokesman for the Kern County Sheriff’s Office said, “This witness observed these suspects commit a burglary at his neighbor’s house across the street. He did what he was supposed to do. He called us and reported it to us.”

Pruitt told reporters that he could not comment directly on the shooting, but did say, “A person has a legal right to use deadly force when they feel that their life or somebody else’s life is in imminent danger or death or great bodily injury.”

The incident is still under investigation and ultimately it will be up to the District Attorney to determine whether any charges will be filed against the man. However, neighbors do not agree that it would be the right move.

“I would be furious. I just think that would be the wrong thing to do,” said Goff.

Another neighbor who witnessed the incident was able to provide helpful information for authorities, including the license plate number. The truck is described as a lowered 1994 white full-sized Chevy pickup with a California license plate number 5A31191.

Anyone with any information is asked to contact the Sheriff’s Department at 861-3110 or the Secret Witness hotline at 322-4040.