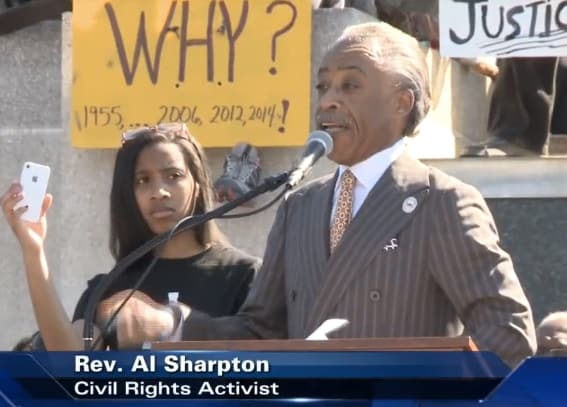 The Rev. Al Sharpton on Monday led a group of activists through the streets of Tallahassee to the Capitol building to protest the state’s controversial ‘Stand Your Ground’ self-defense law.

Prior to the march, the civil rights leader and baptist minister addressed a crowd of approximately 2,500 people who were fired up about the statute that removes one’s duty to retreat and allows one to use force, including deadly force, if one reasonably fears for his/her life.

“To have laws that tell people that they can shoot first and then ask questions later is a violation of our civil rights. I believe that law is inherently wrong,” Sharpton declared. “The law in effect says based on your imagination — if you imagine I’m a threat — you have the right to kill me.”

“Dr. King tore down the walls of segregation with marching,” Sharpton added. “Marching doesn’t solve a problem, it exposes a problem. This law is a problem.”

Also in attendance were the parents of Trayvon Martin and Jordan Davis, two African American teens who were fatally shot by gun owners who both claimed that their lives were in jeopardy when they pulled the trigger.

George Zimmerman, the man responsible for the death of Martin, was acquitted of second degree murder by a jury of his peers. Zimmerman’s attorney never invoked ‘Stand Your Ground’ during the proceedings but a copy of the statute was given to the jury before deliberation.

Michael Dunn, the man who killed Jordan Davis, was convicted of three counts of attempted murder for shooting into a car occupied by four African Americans after a dispute over loud music. The jury that found Dunn guilty of attempted murder was hung on whether to convict him of first degree murder for killing Davis. The extent to which SYG played a factor in the trial remains a hotly debated topic.

Both groups of parents said the law needs to be amended.

“Everybody trying to stand in solidarity and show that these laws that don’t apply to us, we’re here to change them,” said Tracy Martin, Trayvon’s father, to The Associated Press.

“What the law is actually saying is this country doesn’t value the life of black and brown kids,” he continued. “We want our kids to understand their lives are equal value of anybody else life.”

In addition to Rev. Al, the parents of Martin and Davis, and the couple thousand demonstrators, several federal and state lawmakers were in attendance. They, too, echoed the call for reforming the law.

“I’ve never seen a perfect bill and changes need to happen with this bill,” Brown told AP afterward. “When they started, it had good intentions. Protect your castle. But they have extended it to, you don’t like the color of my dress and you feel threatened after you start a fight — there’s something wrong with that.”

Meanwhile, proponents of the law point to the fact that since its passage in 2005, the overall level of violent crime has decreased.  Moreover, polls consistently show that a majority of the public supports the law.