Suspect shot, killed with own gun during sexual assault (VIDEO) 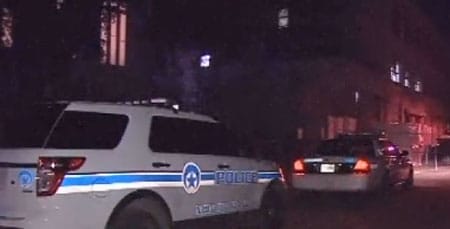 “This is crazy,” said one area resident. “We consider this the quiet side.” (Photo credit: WWLTV)

A man is dead after he was fatally shot with his own gun while sexually assaulting a woman Thursday night in the New Orleans neighborhood of Bywater.

Local media reported that it was around 9:30 p.m. when a man and a woman, neither of whose names have been released, were walking down the street when they were approached by a man who was later identified as 23-year-old Samuel Raines.

Raines was armed with a gun and forced the two victims to enter a nearby school building which was currently under renovation and empty at the time.

Raines then proceeded to sexually assault the woman. However, while his attentions were focused on the female, the male victim was somehow able to gain control of her attacker’s gun, which he then used to fatally shoot Raines.

One woman who lives nearby, told reporters that she heard two pops shortly before hearing the sound of sirens, although police have not confirmed how many shots were fired or how many times and where Raines was struck.

When police arrived, they recovered a gun from the scene and as part of the ongoing investigation are trying to determine its origin.

Authorities also discovered that Raines had served about seven years in prison and had a criminal history in the area dating back to 2006 which included gun charges – which were downgraded to a misdemeanor marijuana charge – as well as kidnapping, purse snatching and auto theft.

Once the investigation is completed, the case will be turned over to the prosecutor, but no charges are expected to be filed against the man who delivered the fatal shots.

“That’s where my little one goes to school,” a woman commented as she watched authorities scour the area during the investigation. “Wonder if there’s going to be classes tomorrow.” She added.

But school was back in session the following day and appeared unaffected by the events which occurred the night before.